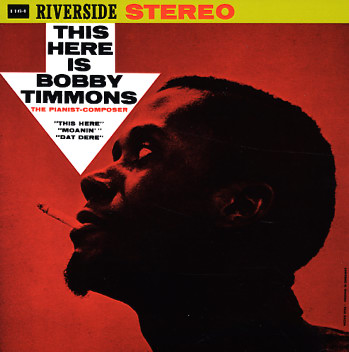 This Here Is Bobby Timmons

Fantastic early work from pianist Bobby Timmons – a set that shows all the brilliant young genius that marked his playing at the time! Although only a trio session, the album grooves with the best sort of vibe that you'd find in Bobby's recordings with Art Blakey or Cannonball Adderley – probably because of the excellent rhythm accompaniment by Sam Jones and Jimmy Cobb, who really make the album cook with a tremendous amount of energy! The set list is virtually the Bobby Timmons songbook, and includes classics like "This Here", "Dat Dere", "Moanin", and others – all done in lively soul jazz trio versions different than the famous renditions you probably already know!  © 1996-2021, Dusty Groove, Inc.
(Teal label stereo Orpheum pressing. NOTE – Vinyl has a heated patch that renders the first track on each side, "This Here" and "Dat Dere", unplayable. Cover has some ring & edge wear and discoloration from age.)