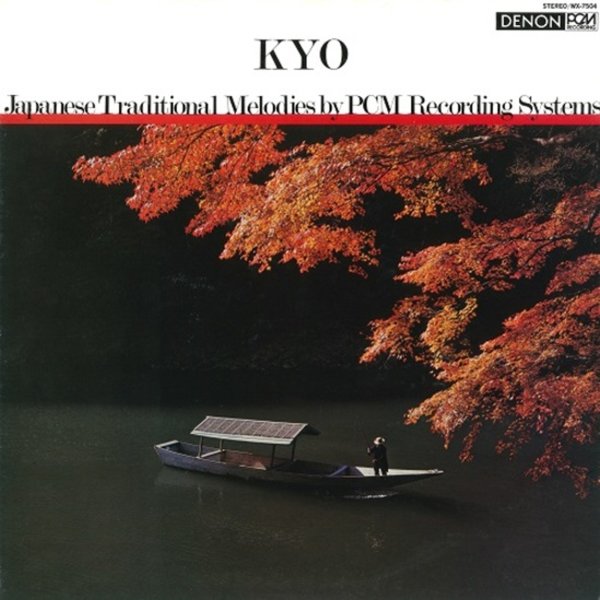 A really cool record from the Japanese scene of the 70s – one that mixes traditional instrumentation with some high fidelity recording styles – then adds in just the right dash of contemporary elements too! The set's not as all-out funky as others like it from the time, but does rise up with some larger soundtrack-styled arrangements that are mighty nice – and there's a great balance of saxophone solos next to koto and shakuhachi, which makes for a warm style that moves between the acoustic aspects of the traditional instruments and some surprisingly jazzy moments too! This style really opens up on the second half of the record, which has the arrangements getting fuller and more uptempo – almost clubby at times, but with a great action soundtrack sort of vibe.  © 1996-2023, Dusty Groove, Inc.

Shakuhachi – Ballads Of The Sea/Umi No Uta
Columbia/Lawson (Japan), 1976. New Copy (reissue)
LP...$42.99 49.99
A fantastic funky album from 70s Japan – one that has the shakuhachi work of Kifu Mitsuhashi mixed with these slow-stepping grooves that have plenty of warm electric touches! The style is nice and mellow – almost as if a Japanese reed musician got the chance to record for CTI Records ... LP, Vinyl record album

Shakuhachi – Ballad Of The Mountain
Columbia/Lawson (Japan), 1976. New Copy (reissue)
LP...$42.99 49.99
Really cool work on shakuhachi – and a set that's way more than just the ballads you might expect from the title! Japanese reed player Kifu Mitsuhashi definitely uses some older modes here, and begins the set as such – but as the record moves on, more contemporary instrumentation comes ... LP, Vinyl record album

Shakuhachi – Ballad Of The Village
Columbia/Lawson (Japan), 1976. New Copy (reissue)
LP...$42.99 49.99
A great blend of funky jazz and wooden flute – the Japanese shakuhachi reed instrument, blown by Kifu Mitsuhashi here – then mixed with some larger backings that almost have a CTI Records sort of groove! The approach is similar to some of the best 70s projects from Hozan Yamamoto ... LP, Vinyl record album

Tsumetai Mizu
Columbia/Lawson (Japan), 1981. New Copy (reissue)
LP...$42.99 49.99
Mighty nice work from Kyoko Furuya – a singer who has a bit more soulful depth than some of her contemporaries on the city pop scene – working here with the sort of backing that might be more like British soul overall, in a way that really lets Kyoko get at some of the richer currents ... LP, Vinyl record album

Point Zero
Philips/Lawson (Japan), 1983. New Copy (reissue)
LP...$42.99 49.99
Junko Ohashi is a Japanese singer from the city pop generation – but she gets a really soulful setting here, thanks to a strong backdrop of players from American jazz and soul! The set was recorded in New York, with production from Teruo Nakamura – who seems to take Junko into vocal ... LP, Vinyl record album

Rain Child & The River King
Better Days/Lawson (Japan), 1986. New Copy (reissue)
LP...$42.99 49.99
Electro funk from the Japanese scene of the 80s, but at a level that's nicely deeper than some of the more commercial material of the time – handled with lots of guitar and vocals from Makoto Matsushita, who really seems to have gotten a bit hipper since his First Light work! The vibe is ... LP, Vinyl record album

Grey Skies
Crown/Lawson (Japan), 1976. New Copy (reissue)
LP...$39.99 49.99
A really lovely little record from mid 70s Japan – a set right at the start of that great moment when singers like Taeko Ohnuki were really helping the scene to find it's own sound and voice! The album's got a bit of a sunny 70s Cali vibe – currents of jazz and soul running through the ... LP, Vinyl record album

Bandwagon
Crown/Lawson (Japan), 1975. New Copy (reissue)
LP...$42.99 49.99
The debut album of Shigeru Suzuki – a set recorded by the Japanese singer after the breakup of Happy End, and one that's done in mid 70s California, with a vibe that's nicely different than his work with that previous group! There's a mix of jazzy instrumentation and roots rock touches going ... LP, Vinyl record album

Funny Walkin
Blow Up/Lawson (Japan), 1977. New Copy (reissue)
LP...$49.99 54.99
A 70s classic from Nanako Sato – a singer with a great mix of sweet, sultry styles – and one who often brought a bit of jazz into her work as well, even though the record's not exactly a jazz album overall! Arrangements and keyboards are by Yuji Ohno, an artist who always knew how to ... LP, Vinyl record album

Adventures Of Kindaichi Kosuke (Kindaichikosuke No Boken)
King/We Want Sounds (France), 1977. New Copy (reissue)
LP...$31.99 34.99
There's a vampire with a flute on the cover – and that image alone is more than enough to make us drop the needle on this rare Japanese gem from the 70s! And fortunately, the sound of the music is equally cool – funky fusion with some nicely spacey currents – almost a Mizell ... LP, Vinyl record album

Tadaima
Midi/We Want Sounds (UK), 1981. New Copy (reissue)
LP...$30.99 34.99
A Japanese electro pop masterpiece from Akiko Yano – done with lots of help on production from Ryuichi Sakamoto, and lots of musical help from other members of YMO too! Yet the set's got a very different vibe than Sakmoto's music and that of his group – maybe more tuneful, at a level ... LP, Vinyl record album