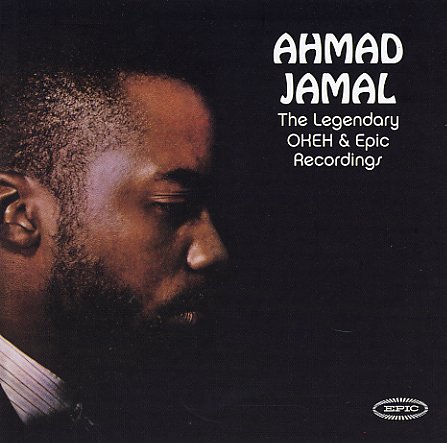 The long-overdue reissue of some of Ahmad Jamal's first recordings – early sides for the Okeh and Columbia labels, all tunes that would go on to have a huge influence on the use of the piano in jazz! All tracks on the set were recorded in the early 50s with Jamal's great drumless trio that featured Ray Crawford on guitar and either Eddie Calhoun or Israel Crosby on bass – the latter of whom is tremendous here, working as a player who really helped set his instrument free from its traditional role in jazz. The trio's blend of guitar, bass, and piano is completely unique – extremely inventive at both a rhythmic and melodic level, as each instrument often fills both roles equally well – dancing around with an internal groove that emerges outwardly as an especially fluid approach to the tune. If you've never heard Jamal at his early best like this, the CD's gotta be one of the best places we can think of to start – as it features 21 titles in all, all beautifully remastered with impeccable sound that goes far beyond even our original albums! Titles include "Poinciana", "Black Beauty", "Something To Remember You By", "Pavanne", "Perfida", "Rica Pulpa", "Old Devil Moon", "Autumn Leaves", "Ahmad's Blues", and "Aki & Ukthay".  © 1996-2022, Dusty Groove, Inc.
(Out of print.)

Poinciana
Argo/MCA, 1958. Used
CD...$3.99
The tune "Poinciana" must have been written by Jamal – as the lyrical flowing style of the song is perfect for his deeply soulful piano style. It wasn't, though – although this recording of the tune has made it one of the biggest in Jamal's book from the time, a perpetual ... CD

Miles In The Sky (plus bonus tracks)
Columbia/Legacy, 1968. Used
CD...$2.99
Miles Davis makes the electric transition – in this groundbreaking set from the late 60s! The classic mid 60s quintet is still in place here – Wayne Shorter on tenor, Herbie Hancock on piano, Ron Carter on bass, and Tony Williams on drums – but the sound is looser, freer, and ... CD

Clarke/Duke Project 2
Columbia/Epic, 1983. Used
CD...$6.99
A second set from the Clarke Duke Project – and arguably even more soulful than the first! The tunes here are still rooted in jazz, but strongly move into crossover soul territory too – with vocals from both Stanley Clarke and George Duke – and grooves that really make the best ... CD

Mingus Dynasty (digitally remastered version)
Columbia/Legacy, 1960. Used
CD...$3.99
A Columbia Records classic by the great Charles Mingus – his follow-up to the seminal Mingus Ah-Um, and a set that's got a very similar flavor! As with some of Mingus' best material for Columbia, the album has him working with a slightly larger ensemble, but still holding onto the intensity ... CD

Don't Let Go
Epic, 1978. Used
CD...$7.99
A sweet bit of modern funk from George Duke – working here in a mode that's definitely tighter and more soul-based than his trippier albums of the early 70s – but also in a groove that's pretty darn sweet! George wonderfully blends together his jazz roots and some of the wider soul ... CD