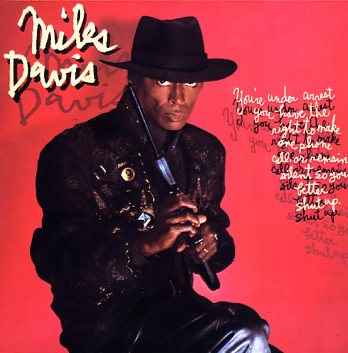 You're Under Arrest (clear vinyl pressing)

Miles Davis
Columbia
Columbia (label)
Get On Down
Get On Down (label)
Jazz (CD, LP)
Featured Reductions

Sweet studio Miles Davis from the 80s – a record that takes the 70s electric experiments and fuses them into a sound that's got a lot more R&B influence than before! The style is a bit poppy at times, but never in a way that's too slick – and often, Davis is using his muted trumpet to state lines boldly in ways that still have a greater sense of depth and craft than most of his contemporaries. A few tracks show some of the gritty New York rock/funk trend of the time, while others are lighter and more lyrical – and titles include covers of "Time After Time" and "Human Nature" – Miles' attempt to find standards in contemporary pop – plus the tracks "Katia", "You're Under Arrest", "Ms Morrisine", and "One Phone Call/Street Scenes".  © 1996-2023, Dusty Groove, Inc.
(Clear vinyl pressing – with obi!)

Live Evil (teal vinyl pressing)
Columbia, 1972. New Copy 2LP Gatefold (reissue)
LP...$27.99 29.99 (LP...$39.99)
A beautiful live representation of the energy of the Bitches Brew years – one that has Miles Davis and the group really letting loose with free-flowing, modally-inspired lines – cooking up an incredible blend of acoustic and electric sounds at once! There's a bit of funk here, but not ... LP, Vinyl record album