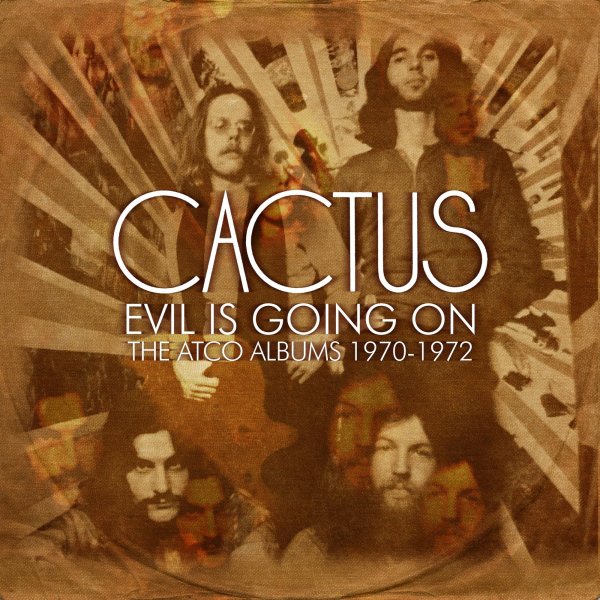 The first four albums from this crucial group – along with four more CDs of rare live material too! First up is the self-titled Cactus – the first album from this legendary group – an important American hard rock powerhouse, driven by the famous rhythm duo of Tim Bogert on bass and Carmine Appice on drums – both of whom roll out of the gate here with amazingly frenetic energy! They're maybe only topped by the guitar work of Jim McCarty, whose searing lines are clearly learned from blues inspirations, then turned up in both speed and power – to match the vocals and harmonica of Rusty Day! There's nothing going on here that sounds like blues rock at all – even though the set begins with a cover of "Parchman Farm" – next to other titles that include "My Lady From South Of Detroit", "No Need To Worry", "You Can't Judge A Book By The Cover", and "Let Me Swim". On One Way Or Another, Cactus are totally at the top of their game – and the guitar of Jim McCarthy really sets the record on fire, right from the very first note – at a level that should have made Jim one of the real guitar hero legends of his generation! Yet there's also power from the whole group going on too – tight rhythms from the team of Carmine Appice and Jim Bogert, the latter of whom starts to bring in his own vocals a fair bit more, offering backup to the raspy lead of Rusty Day. And while there's a few currents that show their older influence from blues, the sound here is massively hard rock all the way through – making the record a great illustration of the way that slavish blues rock gave birth to a fresh new jamming sound in a matter of just a few short years. Titles include "Rockout Whatever You Feel Like", "Song For Aries", "Feel So Bad", "Rock N Roll Children", and "Hometown Bust". Restrictions is next, and despite the title, there's no restrictions at all – as Cactus seem to be even more confident, more able to stretch their wings and fly than ever before – even adding in some extra piano and keyboards at points to the core guitar-heavy sound of the quartet! All the group's best elements are very firmly in place – searing guitar, righteously confident vocals, and a strutting sensibility that makes this early 70s album way ahead of the game in terms of territory that so many bigger groups would later copy for their own classic records. Titles include "Guiltless Glider", "Evil Alaska", "Sweet Sixteen", "Bag Drag", "Restrictions", and "Mean Night In Cleveland". Ot N Sweaty is a record that's got a bit of a shift in the classic Cactus lineup – as the group's still driven strongly by the work of Carmine Appice on drums and Tim Bogert on bass, but get guitar power from Werner Fritzschings, who's a pretty amazing player – next to some added keyboards from Duane Hitchings, and vocals from Peter French – a singer who's ballsy power might be even more in line with the group than their previous lead singer! The album's got an unusual approach in that side one was recorded live, side two in the studio – each with a nicely different flavor as a result – on titles that include "Swim", "Our Lil Rock N Roll Thing", "Bedroom Mazurka", "Telling You", "Bad Stuff", and "Bringing Me Down". 8CD set is overflowing with great material – bonus tracks added to three of the four albums in the collection, than a further 4CDs worth of live material – titled Fully Unleashed – The Live Gigs Vols 1 & 2. The live material is great – and really shows the tightness of the group at their best!  © 1996-2023, Dusty Groove, Inc.