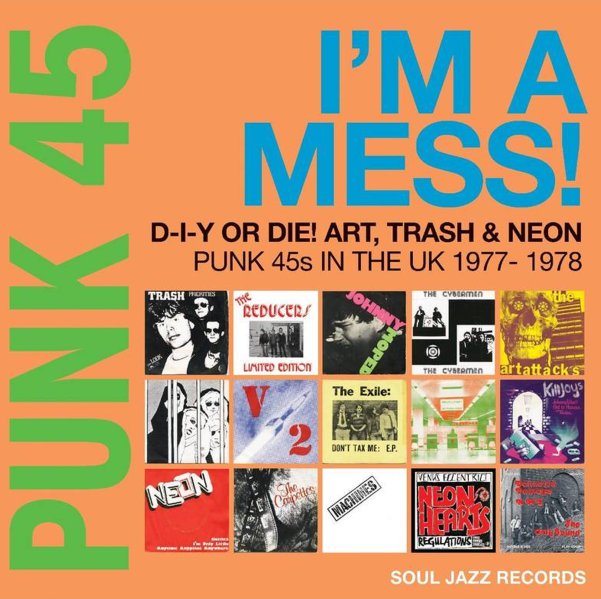 Also available
Various — Punk 45 – I'm A Mess – DIY Or Die! Art, Trash, & Neon – Punk 45s In The UK 1977 to 1978 ... CD 21.99
A well-done set that really goes past the obvious choices of cuts from the early years of the UK punk scene – much more indie and obscure than some of the other collections of this nature – with a very deep dig into the world of the 7" single! The gems within are partially pictured on the front cover – and as you can see, these aren't the big hits of the punk generation – but a whole host of obscure tracks issued on small labels – collected together here in a full length set that really opens up this side of the scene! Titles include "So Many Ways" by the Electric Chairs, "I'm A Mess" by Stormtrooper, "Venus Eccentric" by Neon Hearts, "Speed Freak" by V2, "Fascist DJ" by The Exile, "Feel So Good" by Lucy, "NME" by Dansette Damage, "Naive" by The Killjoys, "Cybernetic Surgery" by The Cybermen, "Bottles" by Neon, "Help I'm Trapped" by The Carpettes, "Priorities" by Trash, "Saints & Sinners" by Johnny & The Self Abusers, and "Jerkin" by The Drive.  © 1996-2023, Dusty Groove, Inc.