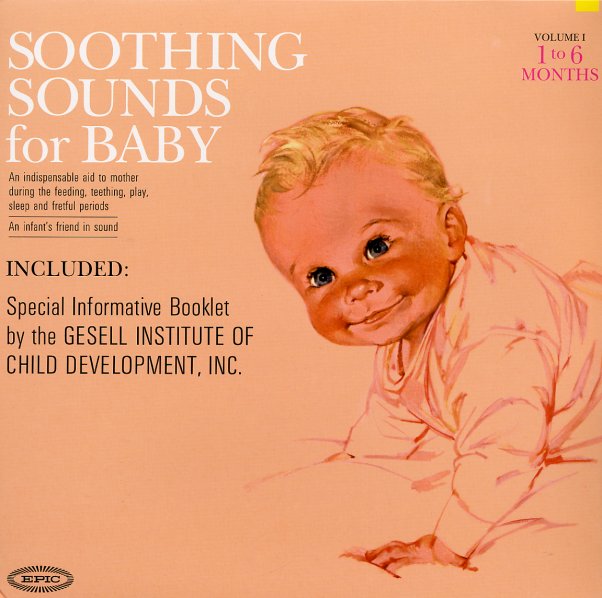 A great record for a baby – if you want to either mess that baby up for the rest of his life, or turn him on forever to the sound of electronic music! Billed as "an infant's friend in sound" these Soothing Sounds albums were issued in the early 60's as an electronic aid to mothers with new babies – special space-age music that would help to calm and raise their kids. In reality, though, the albums are instead amazing bits of early electronic music, put together by the legendary Raymond Scott – known best to the world for his famous cartoon music decades before! Scott was an electronic music pioneer, and these albums were put together by him on his own contraptions, in conjunction with the Gesell Institute of Child Development – who were brought on board to give the whole thing a scientific pedigree. We can't say for sure how well the "science" of the music actually works – but the sound is amazing, and these records have become collectors classics in the world of analogue electronics!  © 1996-2022, Dusty Groove, Inc.
(Late 90s Dutch Basta reissue.)

Extended Voices
Odyssey, Late 60s. Very Good+
LP...$29.99
An excellent set that was put together by Alvin Lucier, and which features pieces that use the voice altered by electronic processing – a pretty new concept at the time, and which comes across here with some wild results! Our favorites on the set include "She Was A Visitor" by ... LP, Vinyl record album

Electronic Music
Turnabout, Late 60s. Very Good
LP...$4.99
Classic early album of electronic music that features some nice pieces by Walter Carlos – "Dialogues For Piano & 2 Loudspeakers" and "Variations For Flute & Electronic Sound" – both recorded in the years before he switched on Bach, and long before he changed ... LP, Vinyl record album

Mikrophonie 1/Mikrophonie 2
Columbia, 1965. Very Good+
LP...$39.99
Columbia album that features the original recordings of these 2 "Mikrophonie" compositions – one for tam tam, microphones, filters, and potentiometers; the other for choir, hammond organ, and ring modulators. Both tracks are excellent examples of Stockhausen's best work with ... LP, Vinyl record album

Many Voices Of Luciano Berio
RCA, 1975. Near Mint-
LP...$6.99
Berio himself conducts the London Sinfonietta in this nice set of avant garde vocal pieces. Some of the tracks are in the more traditional atonal range, but there's a great one called "Melodrama" that basically involves an extended apology from the singer to the audience! LP, Vinyl record album

Fascinating World Of Electronic Music
We Are Busy Bodies (UK), Early 60s. Sealed
LP...$11.99
Maybe the coolest record we've ever heard from the team of Tom Dissevelt and Kid Baltan – a record that's every bit as groundbreaking in its use of electronics, but even more playful overall! There's a slight touch of jazz at times – almost a Dick Hyman/Moon Gas sort of mode – as ... LP, Vinyl record album

Voice Of The Xtabay (10-inch)
Capitol, Early 50s. Very Good+
LP...$9.99
Legendary vocal work from the postwar years – some of the earliest recordings from the enigmatic Yma Sumac – an artist whose records really laid the groundwork for an entire generation of exotica records to come! Sumac's authenticity has been debated over the years – but there's ... LP, Vinyl record album