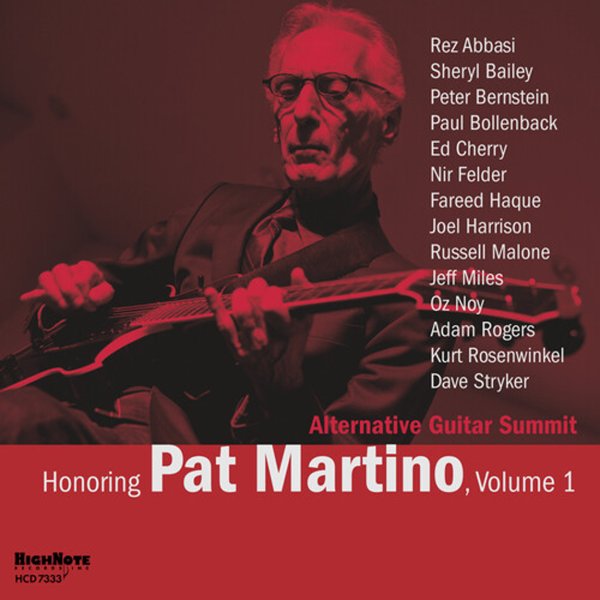 Also available
Rez Abbasi, Sheryl Bailey, Peter Bernstein, & Others — Honoring Pat Martino Vol 1 ... CD 15.99
A host of great guitarists, all coming together to pay tribute to one of their own – the mighty Pat Martino, an artist on the strings from his early years in the 60s in organ combos, through his very creative 70s material, into a great run of albums in later years too! Pat's memory is in great company here – on tunes that have a nicely lean vibe, and really allow for plenty of space for guitar solos – sometimes with two artists in the lineup, shifting their sound nicely – sometimes just a single player on the cut, depending on the tune! Most tracks feature the same group on rhythm – Kevin Kozol on keyboards, Dezron Douglas on bass, and Allan Mednard on drums – and titles include "Inside Out" with Adam Rogers and Peter Bernstein, "Black Glass" with Kurt Rosenwinkel, "Line Games" with Fareed Haque, "Joyous Lake" with Nir Felder and Oz Noy, "Noshufuru" with Rez Abbasi and Jeff Miles, "Willow" with Ed Cherry and Sheryl Bailey, "Lament" with Russell Malone, "Country Road" with Jeff Harrison, and "On The Stairs" with Dave Stryker and Paul Bollenback.  © 1996-2022, Dusty Groove, Inc.
(Penmark through barcode.)

Never Can Say Goodbye – The Music Of Michael Jackson
High Note, 2010. Used
CD...$11.99
An organ-based tribute to Michael Jackson – served up by Hammond hero Joey DeFrancesco, in a set of surprisingly soulful grooves! Joey's been playing a bit of straight soul jazz in recent years, and it's a great change to hear him go back into some of the mixture of soulful styles he was ... CD

Trip
High Note, 2014. Used
CD...$6.99
Some of the densest, most powerful music we've heard from trumpeter Tom Harrell in years – and that's saying a lot, given how much we've loved all his other recent records! Tom's working here in a very spare setting – no piano, just a quartet format with Mark Turner on tenor, alongside ... CD

Spirits Up Above
High Note, 2004. Used
CD...$8.99
A beautiful tribute to the genius of Roland Kirk – one that comes across with all the warmth and soulfulness of Kirk's classic recordings! 8 of the 9 tracks on the set are original compositions by Kirk – played by Turre in a style that recalls the brilliantly inventive and creatively ... CD

All About The Melody
High Note, 2016. Used
CD...$9.99
A mighty nice record from Russell Malone – a guitarist with a warm, deep, hollow-body sound that's stayed strong over all his many years in music! The set's a nicely understated one that presents Malone right up front in a quartet – crafting the kind of solid, soulful lines that ... CD

Ascension
High Note, 2020. Used
CD...$9.99
We love this group – and with each new record, they give us reason to love them even more – and realize that their totality is even greater than the sum of their many all-star parts! The lineup alone is enough – Wayne Escoffery on tenor, Jeremy Pelt on trombone, James Burton III ... CD