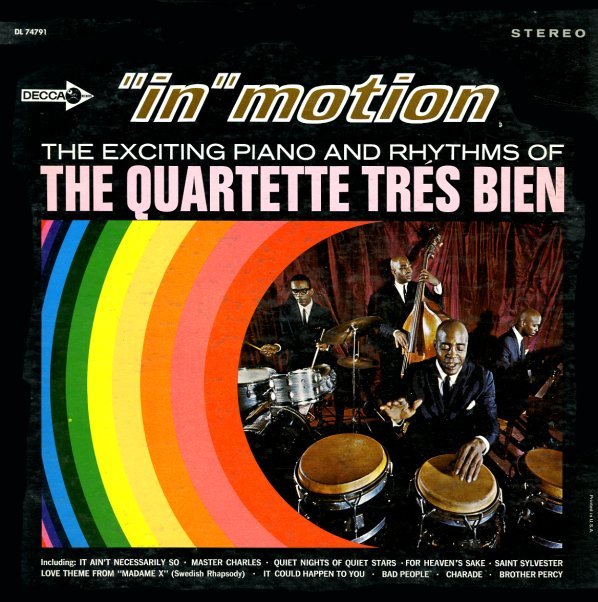 A stunning little set from the Quartette Tres Bien – a sweet 60s group who were every bit as groovy as the Ramsey Lewis Trio, but never fully got their due! This set is one of the group's best – filled with some killer original titles – all delivered with their unusual "piano trio plus" approach – which adds in extra percussion from Percy James on bongos and congas, to the group that features Jeter Thomas is on the piano, Richard Simmons on bass, and Albert St. James on drums. The percussion is often used in nicely exotic ways, while the trio still grooves with a soul jazz vibe – and our favorite numbers include "Brother Percy", "Bad People", "Saint Sylvester", and "Master Charles" – but the whole thing is top notch – with some nice covers and and fresh takes on standards, like "It Ain't Necessarily So", "Quiet Nights Of Quiet Stars", "It Could Happen To You", and "Charade".  © 1996-2021, Dusty Groove, Inc.
(Mono pressing.)

Avant Slant (One plus 1 + II?)
Decca, Late 60s. Near Mint-
LP...$19.99
A wild one! The set features a strange collage of sounds, songs, effects, and a slight bit of jazz – composed by John Benson Brooks, who'd done some earlier modernist work for Riverside in the early 60s, but who here is working in a mode that's sort of to jazz what structural film of the ... LP, Vinyl record album

College Goes To Jazz
Decca, 1956. Very Good
LP...$14.99
A hipper group than you'd expect – especially since they're all college kids! John Graas found these guys playing at Westlake College, and he rightly thought they had a sound that was well worth recording for Decca – not surprising, since these guys have a similar chamber modern groove ... LP, Vinyl record album