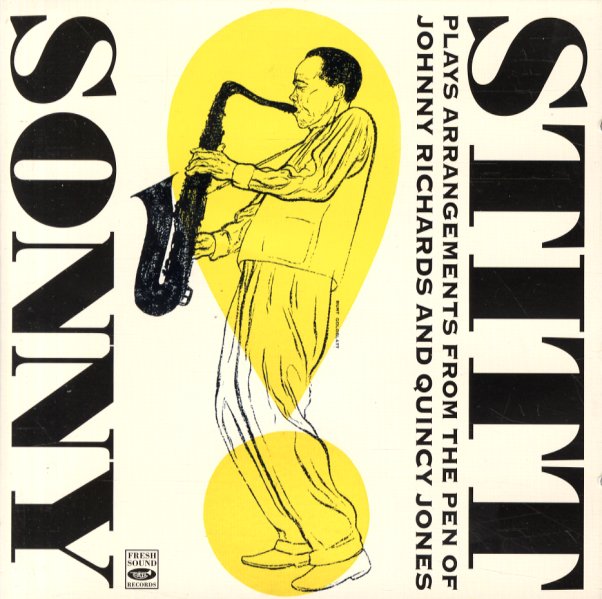 Two gems by Sonny Stitt! The first set features Sonny blowing clean and soulfully, over larger arrangements by Johnny Richards – in a format that's quite different than any of his other records! The Richards touch is wonderful here – mellow and warm, with some Kentonite styles, but cleaner and leaner, in a way that works perfectly with Stitt's horn. Titles include "Hooke's Tours", "Loose Walk", "Pink Satin", "Opus 202", "Sweet & Lovely", and "Sancho Pozo". The second album features Sonny plus the early genius of Quincy Jones – a really great combination that makes for a standout session on Roost! As you might guess with Quincy handling the arrangements, the group here is bigger than usual for Stitt – especially given that the bulk of his Roost sessions were small group ones – but that aspect makes for a really strong record here, one that has Sonny's alto soaring out over the top of some hiply swinging Jones' charts, already infused with the kind of soul that would burst forth more famously in the 60s. Titles include a few nice originals, like "Quince" and "Sonny's Bunny", but even on the standards – like "Stardust", "Lover", and "Love Walked In" – Stitt's in top form, and solos with creativity and imagination that show him at the top of his talents!  © 1996-2022, Dusty Groove, Inc.

Sonny Stitt Plays
Roost/Warner (Japan), 1955. Used
CD...$11.99 14.99
One of Sonny Stitt's amazing albums for Roost – a record with a beautifully mature conception of bop soloing, and a totally confident tone throughout! There's an understated brilliance here that's nearly impossible to describe in words – a sense of placement, timing, and phrasing that's ... CD

Saxophones Of Sonny Stitt
Roost (Japan), 1958. Used
CD...$11.99
Magical Stitt work on Roost – an album of marked understatement, from the simple title, standard cover, and lack of session details on the back – all of which might make you think "oh yeah, heard this one before." But one drop of the needle opens the album up immediately ... CD

Sonny Stitt Swings The Most
Verve (Japan), 1959. Used
CD...$26.99
There's no argument from us – because Sonny Stitt really does swing the most – but even more than that, what really matters to us is his amazing sense of tone, timing, and execution! The album's a near perfect example of a saxophone master at his height – a set that features ... CD

Hard Swing
Verve/Universal (Japan), 1959. Used
CD...$18.99
Sublime Sonny Stitt for Verve – a near-perfect record in just about every way from start to finish! Sonny's tone is amazing here – crisp, but still with a great deal of warmth – and focused, but never in a way that's hackneyed or cliched – really showing the brilliance of ... CD

Tune-Up!
Muse, 1972. Used
CD...$12.99
By this point in his career, Sonny hardly needed a tune up in his style – but the album's a great one from his post-Prestige years, and a real back-to-basics effort that recalls the genius of his work on Roost! The format is straight and simple – Stitt's tenor and alto fronting a ... CD

Cool Jazz From Holland – The First Dutch Modern Jazz Recordings 1955 to 1957
Fresh Sound (Spain), Mid 50s. Used 2CD
CD...$19.99 (CD...$26.99)
A massive amount of music from the Dutch jazz scene of the 50s – a surprising hotbed of modern jazz, and a European spot that rivaled some of the new creations that were also emerging in Sweden and France! There's a mix of modes going on there that moves between California cool and New York ... CD

Couriers Of Jazz
Carlton/Fresh Sound (Spain), 1958. Used
CD...$6.99
Killer jazz from the UK! This is one of the best-ever albums by the legendary Jazz Couriers group that starred England's greatest tenor players ever – Ronnie Scott & Tubby Hayes. The album is darn tough to find in the original, and this reissue is long long overdue – especially as ... CD

Jazzmen Detroit
Savoy/Fresh Sound, 1956. Used
CD...$9.99
One of the first albums from guitarist Kenny Burrell as a leader – a date that has him working with players from his hometown scene in Detroit – in case you couldn't guess from the title! Kenny's style here is a bit different than on the Blue Note dates of the time – almost a bit ... CD