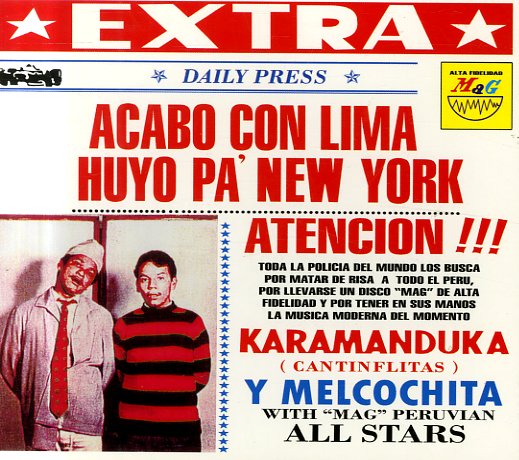 Karamanduka and Melcochita build a bridge from Lima to New York with this wonderful collection of sounds – a record that's every bit as strong as the most cooking sessions on Peru's Mag label from the time, but which also has a special flavor that really nods to the Latin Soul generation too! There's a brash, lean energy to the record that's really telegraphed by the cover – a fantastic sound that definitely warrants the "Extra" at the top – as the pair work with some of the best players on the Peruvian scene on some blistering numbers with impeccable instrumentation! Titles include "Peruvian Boogaloo", "Vuela Mi Descarga", "Booga Jazz", "Peruvian Manteca", "Curerando", "Peruvian Guajira", and "El Sobrado".  © 1996-2022, Dusty Groove, Inc.