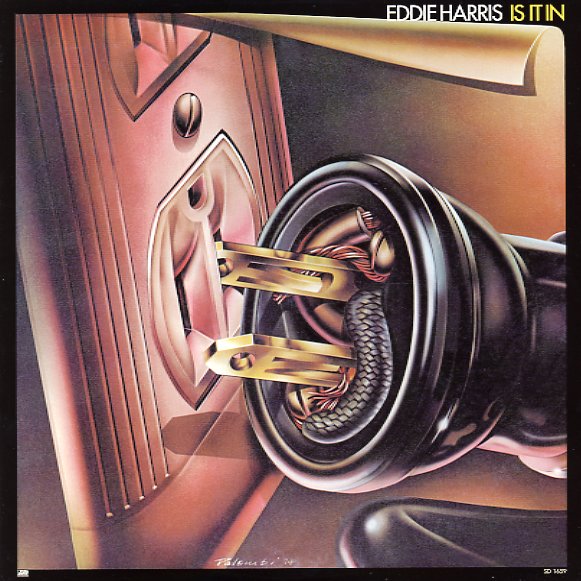 One of Eddie's groovier Varitone albums, and a record that has a very electric sound to it! At times, Eddie's electric sax is so off-beat that you'd think he was playing a synthesizer instead of a sax, but in true Harris form, he always keeps it funky, and even the weird sounds have a great groove to them. Tracks include "Space Commerical", "Funkaroma", "Happy Gemini", "Look Ahere", and "It's War".  © 1996-2023, Dusty Groove, Inc.

Cool Sax From Hollywood To Broadway
Columbia, Mid 60s. Very Good+
LP...$4.99
Ok, so this isn't funky Eddie Harris – but this is one of Eddie Harris' more unique albums from the 60s – and not just for the Tomi Ungerer cover! The record features Eddie blowing in that lean and soulful mode that he used on his best Vee Jay albums – a bit exotic, but never ... LP, Vinyl record album

For Bird And Bags
Exodus, Mid 60s. Very Good+
LP...$4.99
An overlooked gem – with early work by the great Charles Stepney! As you might guess from the title, the record is ostensibly a tribute to Charlie Parker and Milt Jackson – but that's just on the surface, because there's a lot more going on here than simple boppish stuff. In reality, ... LP, Vinyl record album

Half & Half
Vee Jay, Early 60s. Very Good-
LP...$7.99
One of the oddest Eddie Harris records for Vee Jay – and one of the coolest too! One side's got a very young Muhal Richard Abrams doing the arrangements and playing piano, and features two great original tracks "Half & Half" and the extended "Yeah, Yeah, Yeah", which ... LP, Vinyl record album

How Can You Live Like That?
Atlantic, 1977. Near Mint-
LP...$6.99 9.99
Eddie moving into a righteous funk vein – but still keeping things nice and electric! Some tracks feature a larger group, and others have a small combo – but Eddie's sound is still great, especially on Varitone, and other players are pretty soulful, like Paul Humphrey, Cedar Walton, ... LP, Vinyl record album

Eddie Harris Goes To The Movies
Vee Jay, Early 60s. Very Good
LP...$1.99
Forget the title – which sounds like a bit of a gimmick – as this is a fine fine Eddie Harris album! After the success that Vee Jay had with Eddie Harris' huge hit version of "Exodus", they cut this album of Eddie playing movie themes – like "Green Dolphin ... LP, Vinyl record album

More Soul
Atlantic, 1960. Very Good
LP...$7.99 (CD...$5.99)
Given Hank Crawford's soulful legacy on the alto sax – one that already made him a star in Ray Charles group by the time of this LP – it would be hard to add More Soul to his bag – but that's what he's going for here, and we've gotta say that it works pretty darn well! The ... LP, Vinyl record album