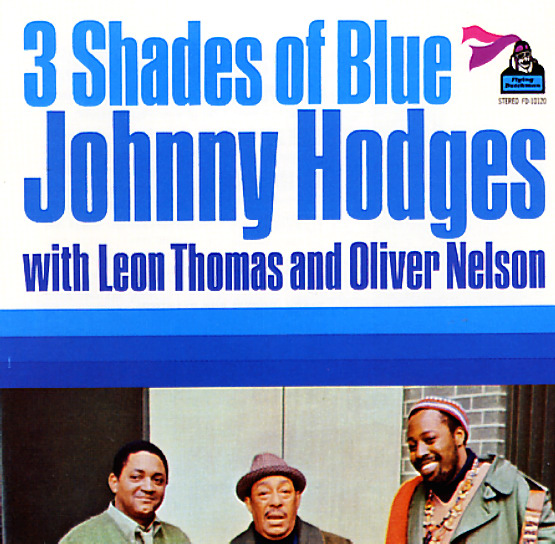 An excellent late Johnny Hodges album that mixes his supreme talents with two of the other big stars of the Flying Dutchman label – Oliver Nelson and Leon Thomas – both of whom contribute wonderfully to the set! Nelson arranged the whole album, and gives it the groovy feel of some of his best orchestrations from the late 60s – nicely swinging throughout, but also awash in sophisticated colors and tones at the bottom! Leon Thomas sings vocals on a few cuts, and although he's a little straighter than on his own recordings, or the records he did with Pharoah Sanders, he still gives the set a hip sound that's a great change from the usual Johnny Hodges record – especially some of his 60s sessions with Wild Bill Davis. Hodges is great throughout, and the best tracks include "Yearning", "Welcome To New York", "Disillusion Blues", and Nelson's great "Black, Brown, & Beige" – plus a hip vocal take on "Dukes Place".  © 1996-2022, Dusty Groove, Inc.
(Cover has some wrinkles in the gloss.)

Stomp Off Let's Go
Flying Dutchman, 1976. Near Mint-
LP...$11.99
An unusual late record from the legendary Sonny Stitt – a set that's got some electricity in the group, but at a level that's not entirely funky jazz! Instead, the tracks are long, and feature some well-crafted solos from the leader – and the vibe here is loose at times, a bit like the ... LP, Vinyl record album

Swiss Suite
Flying Dutchman, 1971. Very Good+ Gatefold
LP...$14.99
A killer set of searing soulful spiritual material from Oliver Nelson – and one of his best albums of the 70s! There's hardly anything "Swiss" in the music – save for the fact that it was recorded at the Montreux Jazz Fest – as the large ensemble recording has Nelson at ... LP, Vinyl record album