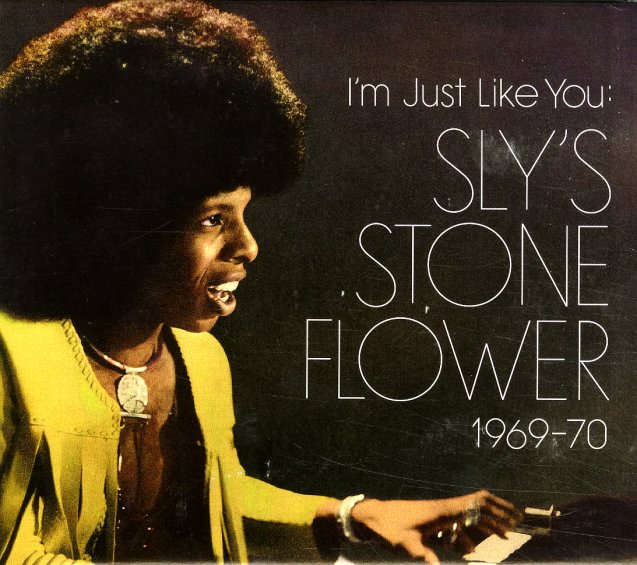 Also available
Sly Stone & Others — I'm Just Like You – Sly's Stone Flower 1969-70 ... CD 14.99
An incredible snapshot of the funky soul genius of Sly Stone in an early transitional period – featuring all the known recordings of his short-lived Stone Flower label and production house from 1969-1970! Sly was a rising star at this point, and while the Stone Flower Productions name had been established already for Sly & The Family Stone's work-to-date, there was a brief period when he and manager David Kapralik set out make Stone Flower an official management and production house – and recorded some great tunes with female vocal trio Little Sister, funky soul singer and harmonica player Joe Hicks and funk rock sextet 6ix – as well as some gems sung by Sly himself. Sly & The Family Stone were soon to take off in a really huge way, his business relationship with Kapalik was becoming strained, and other factors behind-the-scenes made it impossible for Stone Flower Productions to really take root, but this brief period is fantastic. We're so glad it's been dug up and collected here! The cuts are primarily written and produced by Sly Stone – with Sly out front on "Just Like A Baby", "Africa", "Spirit" and "Scared" – and other great tracks include "You're The One" and "Somebody's Watching You" by Little Sister, "Home Sweet Home (Part 2)" and "I'm Going Home (Part 1)" by Joe Hicks, "Trying To Make You Feel Good", "You Can, We Can" by 6ix and more. 18 tracks in all – with a nice booklet of notes by Alec Palao, and an interview with the elusive Sly Stone himself!  © 1996-2023, Dusty Groove, Inc.
(Purple vinyl pressing!)

Live In New Orleans
Capitol, 1981. New Copy 2LP Gatefold (reissue)
LP...$22.99 34.99 (LP...$4.99, CD...$19.99)
A live album from the mighty Frankie Beverly and Maze – and a set that's every bit as important as their studio classics for Capitol Records! It's always a sign of how huge Frankie Beverly was during the 80s that Capitol let him cut not one, but two double live albums during the early part ... LP, Vinyl record album

You're The Man
Motown, 1972. New Copy 2LP Gatefold
LP...$22.99 26.99 (LP...$9.99)
A mindblowing collection of work from Marvin Gaye – tracks recorded in the space right after What's Going On – many of which were never issued at the time! All this incredible material from 1972 has been brought together to create a stunning double-length album – one that ... LP, Vinyl record album

Lost Soul
Timmion (Finland), 2014. New Copy Gatefold
LP...$6.99 26.98
A new album from the great Willie West – an artist we love for his rare vintage New Orleans work of the 60s and 70s – still sounding surprisingly wonderful all these many years later! Willie's vocals have this raspy, honest charm that's totally great – and like Lee Fields during ... LP, Vinyl record album

One For The Soul (with download – including bonus tracks)
Ze/Light In The Attic, 1985. New Copy Gatefold (reissue)
LP...$6.99 23.98 (CD...$3.99)
The amazing Lizzy Mercier Descloux adds one more global feather to her cap with this sweet little album – a set recorded in Rio, with help from a host of Brazilian musicians – and some special guest work from legendary trumpeter Chet Baker too! The record warms up the sound a bit from ... LP, Vinyl record album