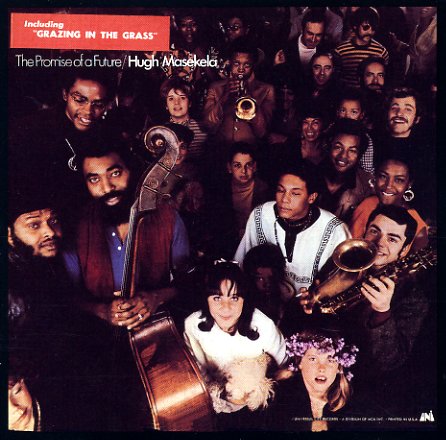 Promise Of A Future

Classic work from Hugh Masekela – and the album that pushed him over the top! The record features his version of "Grazin In The Grass", a runaway instrumental hit when it was issued – and a sly little groover that was based upon some earlier South African pop melodies that Hugh copped from his roots. The group's a tight little quintet with Al Abreu on tenor and soprano sax, William Henderson on piano, Chuck Carter on drums, and Henry Franklin on bass. The whole thing's great – and tracks include "Stop", "Bajabula Bonke", "There Are Seeds To Sow", "Vuca", "Almost Seedless", and "No Face, No Name, and No Number".  © 1996-2022, Dusty Groove, Inc.
(Original pressing. Vinyl has a mark that clicks a bit on "No Face, No Name, And No Number". Cover has some ring and edge wear and a small split in the bottom seam.)

Colonial Man
Casablanca, 1976. Near Mint-
LP...$4.99 6.99
A later album from Hugh Masekela – but still plenty darn hip, way more so than most of the other artists on the Casablanca label at the time! Hugh's South African groove is still very firmly in place here – mixed with a slightly warmer LA soul sound, but expanded with loads of great ... LP, Vinyl record album

Hugh Masekela Is Alive & Well At The Whisky
Uni, Late 60s. Very Good
LP...$5.99 7.99
One of Hugh's most compelling records from the time – cut live at the Whiskey A Go Go, with a jazzy edge that really shows him growing a lot as a musician. The set features small combo backing by a group that features Al Abreu on sax, Hotep Cecil Barnard on piano, Henry Franklin on bass, and ... LP, Vinyl record album

Masekela
Chisa/Uni, Early 70s. Very Good+
LP...$6.99
One of the funkier albums by African trumpeter Hugh Masekela, and a record that's filled with lots of short little groovers that have more of an edge than on previous pop instrumental albums – much more of the hard funky vibe of the Chisa years! The set features loads of great funky 45 cuts ... LP, Vinyl record album

African Sanctus
Philips, 1973. Very Good+ Gatefold
LP...$3.99
The record is a composition "For African tapes, choir, soprano, shouter, African drummer, rock drummer, percussion, guitar, bass, piano, and organ" – and it takes tapes that Fanshawe recorded in the field during the late 60s, and mixes them with larger arrangements featuring all the ... LP, Vinyl record album

World Psychedelic Classics 3 – Love's A Real Thing – The Funky Fuzzy Sounds Of West Africa
Luaka Bop/Stones Throw, Early 70s. Near Mint- 2LP
LP...$24.99
A really mind-bending collection of African grooves – one that digs deep into the West African scene of the early 70s – and comes up with a massive batch of tunes that really opens up our understanding of the music! The sound here isn't just 70s Afro Funk – as the tunes include a ... LP, Vinyl record album