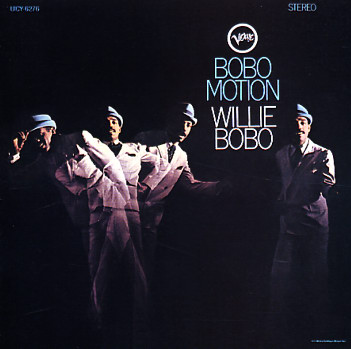 Bobo Motion is groovy motion – heard here on one of Willie's best albums for Verve from the late 60s – a really unique blend of jazz, Latin, and soul-based rhythms! The set's even tighter than some of Willie's other Verve records – and like the classic Uno Dos Tres, it's got some nicely greasy numbers that slide around wonderfully in the groove – next to others that are cleaner, leaner, and plenty darn jazzy! Willie sings a bit on the record, but not much – and the real highlight is the heavy timbales on most of the rhythms, and the crack small combo Latin sound throughout. All tracks are great – and even familiar numbers sound fresh under the Bobo touch! Titles include "Ain't That Right", "Cute", "Evil Ways", "Show Me", "Black Coffee", "Night Walk", and "La Bamba".  © 1996-2021, Dusty Groove, Inc.
(Stereo MGM pressing. Cover has some ring and edge wear, light aging, and some sticker spots on front.)

Married Well
Verve, 1967. Near Mint-
LP...$14.99
The great Latin big band arrangements of Chico O'Farrill meet the groovy production of late-60's Verve – and the result is an excellent album of groovy instrumentals that just won't quit! Chico's arranging skills are still in excellent shape here – and they're augmented by some very ... LP, Vinyl record album

Inolvidables
Verve, 1967. Very Good+
LP...$6.99
The legendary Miguelito Valdes gets some great help on this sweet Verve session from Chico O'Farrill – whose backings really help freshen up the sound, and give the whole record a hip kind of 60s swing! Valdes had been recording for many years by the time of this date, but Chico's ... LP, Vinyl record album