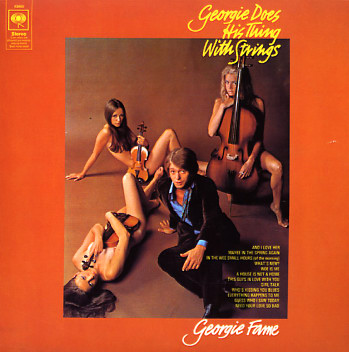 Georgie Does His Thing With Strings

A great cover, and a great little record to match – one that has Georgie Fame singing with a host of string-heavy backings from the great Keith Mansfield! Given Mansfield's roots in the sound library scene, the style here is never as sleepy or hokey as you might expect from the "strings" in the title – but there is a moodier, mellower approach than you'd hear on other Fame albums – a style that's partially aimed at older jazz vocal modes, but which also echoes with sounds of the Scott Walker generation – a newly mature mode that's a really great fit for Georgie's unique style of singing, and which exposes yet another amazing side of his seemingly limitless talents! There's always a nice sense of warmth and wit going on – one that keeps these tunes from just being the usual sort of standard vocal fare of the period – and Mansfield's backings have a lean quality that often pulses with a very gentle groove at the bottom. Titles include "Who's Kissing You Blues", "Girl Talk", "This Guy's In Love With You", "A House Is Not A Home", "Woe Is Me", "Need Your Love So Bad", and "Guess Who I Saw Today".  © 1996-2022, Dusty Groove, Inc.
(Orange label stereo pressing – a beautiful copy!)

Ballad Of Bonnie & Clyde
Epic, Late 60s. Near Mint-
LP...$6.99 9.99
One of the few American albums ever issued by Georgie Fame – a great set of tracks from his early CBS years, put together with a package that was bound to appeal to US fans digging the Bonnie & Clyde movie! The work here is a hip mix of jazz, soul, and R&B styles – all served ... LP, Vinyl record album

Say It Isn't So
Bethlehem, 1957. Very Good+
LP...$19.99
One of the best-ever recordings by Herb Jeffries – a smooth-toned jazz singer from the 50s, with a style that's very much in the mode of contemporaries like Al Hibbler or Billy Eckstine, with a nice cheesecake cover too! The backings are what make this set great – as Russ Garcia has ... LP, Vinyl record album

Sermonette
Riverside, 1961. Very Good
LP...$4.99
Vocalist Billie Poole was an obscure one. She only cut one or two albums in the early 60s, but they're pretty nice ones that mix jazz vocalizing with lots of nice gospelly tinges, in a way that would show up later in the 60s in other singers' work. This hard to find album for Riverside features ... LP, Vinyl record album

Chris Connor
Atlantic, 1956. Very Good+
LP...$16.99
The first album in a legendary run of vocal jazz classics on Atlantic Records – and a set that really helped Chris Connor move to a new level of expression in her music! The sound here is much richer than Connor's previous recordings for Bethlehem – and the small combo jazz backings ... LP, Vinyl record album

I've Been There
Audio Fidelity, 1965. Very Good
LP...$9.99
A rare set from vocalist Jane Harvey – a singer who managed to cut a handful of wonderful sides over the course of a few decades – none of them hits, but all of them great! This mid 60s session was cut in England with some mature backings from Ray Ellis – arrangements that are ... LP, Vinyl record album