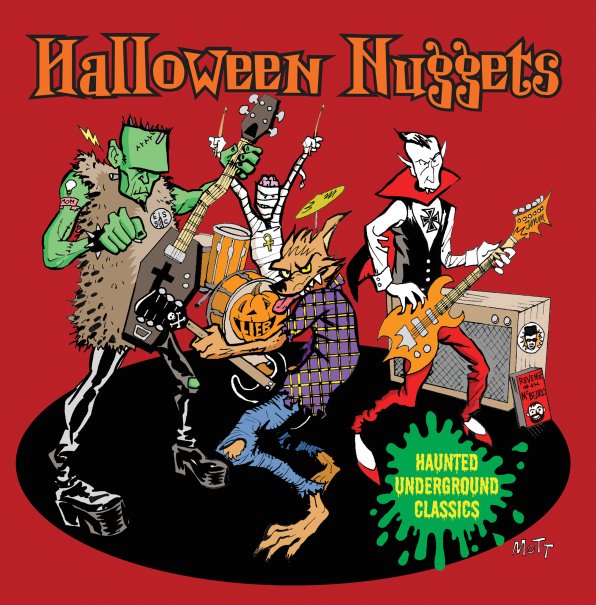 A hip batch of Halloween nuggets – rare singles, mostly from the 60s – and mostly recorded during that wonderful moment when monster movies and rock and roll had a really happy collision! That era yielded plenty of hits, but this set digs way way deeper than those – and it also mixes in trailers from a few key films of the time, all to emphasize the horror setting for the tunes! Titles include "I Was A Teenage Monster" by The Keytones, "The Invasion Is Coming" by The Invasion, "Vampira" by Bobby Bare, "The Devil Drivers" by The Vettes, "Graveyard" by The Phantom Five, "Mummy Walk" by The Contrails, "Ghost A Go Go" by Richard Rome, "Black Magic" by Jericho Jones, "Graveyard Stomp" by Billy Ghoulston, "Jack The Ripper" by The Elites, "House On Haunted Hill" by Kenny & The Fiends, "Jekyll & Hyde" by Jim Burgett, "Strolling After Dark" by The Shades, and "It" by Johnny Fraser & The Regalaires.  © 1996-2022, Dusty Groove, Inc.

Halloween Nuggets – Monster Sixties A Go Go (3CD set)
Rock Beat, Mid 60s. New Copy 3 CDs
CD...$29.99 30.98
A hip batch of Halloween nuggets – rare singles, mostly from the 60s – and mostly recorded during that wonderful moment when monster movies and rock and roll had a really happy collision! That era yielded plenty of hits, but this set digs way way deeper than those – to come up ... CD

Mostly Ghostly – More Horror For Halloween
Ace (UK), Late 50s/Early 60s. New Copy
CD...$9.99 18.99
One of the hippest Halloween collections you could ever hope to buy – an amazing follow up to Ace Records' legendary These Ghoulish Things – and like that one, a treasure trove of oddball novelty numbers with a sweet October spirit! The work here goes way past familiar "Monster ... CD

These Ghoulish Things – Horror Hits For Halloween (And All Year!)
Ace (UK), Late 50s/Early 60s. New Copy
CD...$9.99 18.99
A fab collection of novelty numbers from the late 50s and early 60s – all recorded during the glory days of the monster rock and roll trend! There's a tone here set by Bobby Pickett's classic "Monster Mash", but which goes way past the obvious to include a great range of lesser-know ... CD