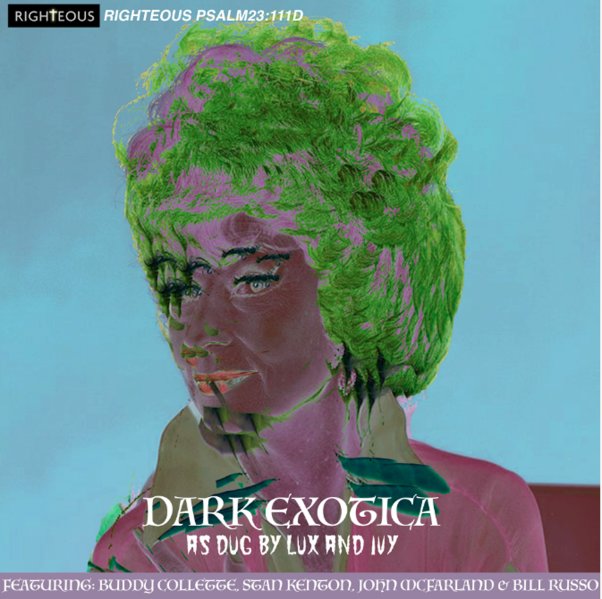 A set that definitely lives up to its title – but in a way that's a bit different than some of the other Lux & Ivy compilations on the Righteous label! This time around, the set is more of a four-pack, featuring different albums that have a great way of blending exotica, higher ideas, and a bit of jazz! First up is Polynesia, by reedman Buddy Collette – very different than any of his better-known work of the 50s – and a complex little set that really shows off a whole new side of his talents! The album was issued by a tiny label away from the LA scene – and has Buddy blending jazz and exotica, but at a level that's way hipper than any of the more mainstream bachelor pad records of the period – maybe even pointing the way towards the very cool records that Buddy would cut overseas. The group is great – very hip – with Gerald Wilson on trumpet, Gene Cipriano on reeds, Justin DiTullo on cello, Red Callender on bass and tuba, Earl Palmer on drums, and either Al Viola or Billy Bean on guitar – very versatile jazz musicians who really follow Buddy's lead on the unusual tunes. Colette himself plays flute and a bit of clarinet – and the set also features some cool vocals from singer Marni Nixon. Next is the very rare Provocatif album from John McFarland – an obscure contribution to the exotica genre, with loads of non-western percussion, bird calls, ukuleles, and vibes. McFarland plays some original compositions like "Watusi", "Summer Storm", "Forbidden", and "The Chimp And The Bumble Bee", and other tunes like "Jungle Bells", "Tangerine", "Where Or When", and "Head Hunters". A more famous album is next, Stan Kenton's Cuban Fire – one of Kenton's greatest records, and the one in which he proves his dedication to Latin styles, by serving up a killer batch of Afro-Cuban tracks with an incredibly authentic feel. The great Johnny Richards handled the arrangements, and the tracks are long and drawn out, with plenty of solo space for the group. Titles include "Fuego Cubano", "Quien Sabe", and "La Quera Baila". Last up is Seven Deadly Sins – one of the most high-concept albums ever recorded by Bill Russo – a full suite of tracks dedicated to the Seven Deadly Sins, and scored with a level of sophistication to match the Stan Kenton group at its modernist height! Although the overall feel is jazz, there's also a fair bit of more serious modes too – almost 20th Century classical at points, or at least some soundtrack sophistication. The tunes are awash in dark colors, and players include Don Sebesky and Eddie Bert on trombones, Burt Collins and Lou Mucci on trumpets, Larry Wilcox on tenor, and Howard Collins on guitar – plus a section of cellos as well. Titles, as you might expect, include "Greed", "Lechery", "Gluttony", "Anger", "Envy", and "Sloth".  © 1996-2022, Dusty Groove, Inc.

Secret Agent File
GNP, Late 60s. New Copy
CD...$5.99 8.99
Although there were plenty of easy and studio musicians who tried to cash in on the success of the Bond-era spy soundtracks, few did it as well as Billy Strange! He gets a helping hand here from Les Baxter and a boatload of west coast session greats like Carol Kaye, Tommy Tedesco, Dennis Budimir, ... CD

Step On Step
International Anthem, Early 70s. New Copy
CD...$13.99 14.99 (LP...$35.99)
Maybe the first-ever album to be issued under the name of the great Charles Stepney – even though the artist/musician/producer/songwriter had a huge role in the careers of Chicago contemporaries like Minnie Riperton, Ramsey Lewis, and Earth Wind & Fire! This set brings together ... CD