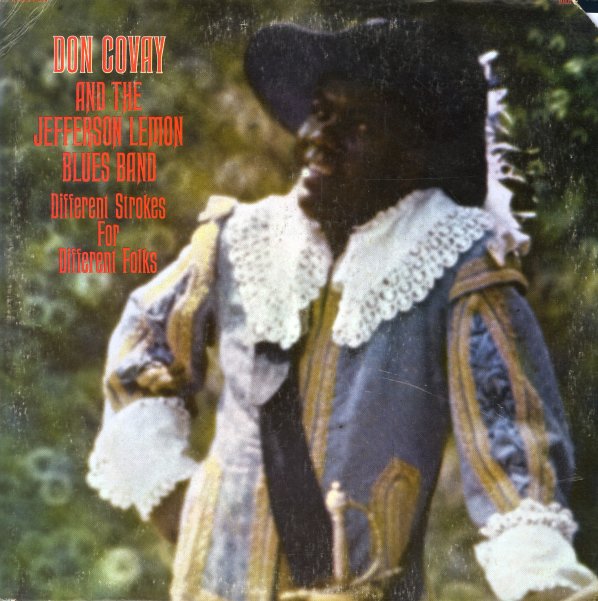 Also available
Don Covay & The Jefferson Lemon Blues Band — Different Strokes For Different Folks ... LP 26.99
A real lost chapter in the career of the great Don Covay – material done after his original funky soul on 60s Atlantic Records, and before his return to fame in the early 70s on Mercury – done in a raw vibe that has a lot more grit than you might expect! There's touches of psychedelic blues in the instrumentation, which was recorded both in Memphis and Muscle Shoals – even though the record comes across with a vibe that's unlike any of the big hits recorded in those scenes at the time! Definitely a standout in the world of soul in the early 70s – with titles that include "Standing In the Grits Line", "Sweet Thang", "Stop By", "Bad Luck", "Hitching a Ride", and "What's In the Headlines".  © 1996-2023, Dusty Groove, Inc.
(Limited edition RSD Essentials pressing – on red vinyl!)

Different Strokes For Different Folks
Janus/Trading Places, 1970. New Copy Gatefold (reissue)
LP...$26.99 (LP...$26.99)
A real lost chapter in the career of the great Don Covay – material done after his original funky soul on 60s Atlantic Records, and before his return to fame in the early 70s on Mercury – done in a raw vibe that has a lot more grit than you might expect! There's touches of psychedelic ... LP, Vinyl record album

Rhythm Blues Party (white vinyl pressing)
Sun, 1962. New Copy (reissue)
LP...$28.99 29.99 (LP...$14.99)
An obscure soul set on the legendary Sun Records label – raw vocals from Frank Ballard, done in a style that still has a few older R&B currents in the mix, but which is definitely pointed strongly towards a 60s groove! Backings are by the band of tenorist Phillip Reynolds, and the sound ... LP, Vinyl record album