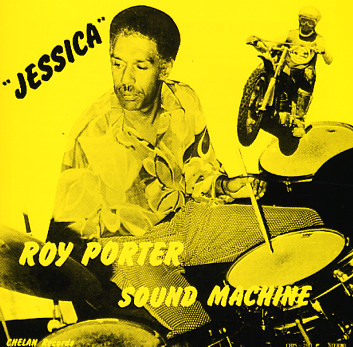 A wonderful mix of soul jazz, funky rhythms, and even more experimental moments – a truly tremendous effort from LA drummer Roy Porter, and the first set issued under the name of his Sound Machine group! The groove here is really unconventional – filled with unusual timings, phrasings, and changes that push it way beyond more familiar jazz funk of Prestige, Fantasy, or CTI – yet still all very much in the pocket, with a righteously soulful vibe that's incredible! The cover's inspired by Roy's son's love of motocross – and one number even features a bit of motorcycle sound effects along with the grooves! The rest of the tracks are heavier on the horns, and feature some wonderful arrangements that are filled with soul and style – always a bit edgey, and never too slick or straightforward. Titles include the classics "Funky Twitch" and "Hip City", plus "Drums for Daryl", "Ooh-La-La", and the legendary "Jessica", a really beautiful number! Comes with a great bonus 45 – the Kenny Dope remix of "Jessica", and a vocal version of the same tune!  © 1996-2023, Dusty Groove, Inc.
(Heavy yellow vinyl pressing, in gatefold cover with obi, and slide-out sleeve with a bonus 7" single!)