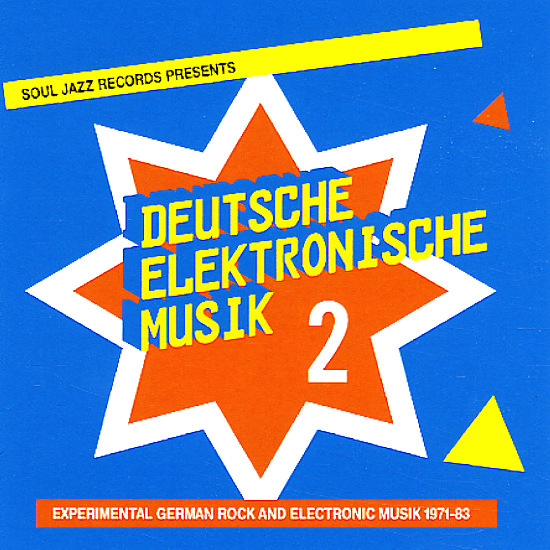 Also available
Various — Deutsche Elektronische Musik 2 – Experimental German Rock & Electronic Musik 1971 to 1983 – Part 1 ... LP 34.99
An amazing collection of electronic music from the German scene of the 70s – easily one of the most exciting, innovative musical worlds of the past century! There was really something special going on in Germany at the time – a confluence of hippie rockers, serious proggers, urban punks, and academic electronicians – all coming together to completely destroy previous (or current) generic conceptions – and make mindblowing music that's still more revolutionary than most sounds from decades to come! This fab second collection of German electronic rock from Soul Jazz digs even deeper than the first – and features a few famous names mixes with some even more important talents from the underground – all packaged together with the rich notes and historical detail that make their compilations so great. Titles include "Le Jardin" by Rodelius, "A Morning Excuse" by Amon Duul II, "Base & Apex" by Eno, Moebius & Rodelius, "In A Sacred Manner" by Gila, "Himmelblau" by Wolfgang Reichmann, "Co Co Pino" by DAF, "Sun & Moon" by Michael Hoenig, "Emphasis" by Harald Grosskopf, "China" by Electric Sandwich, "Zeebrugge" by Asmus Tietchens, "Krautrock" by Faust, "Gibli" by Niagara, "Electric Day" by You, "Die Weisse Aim" by Sergius Golowin, "Danger Cruising" by Pyrolator, "Sundance Chant" by Gila, and "Als Hatt Ich Das Alles Schon Mal Gesehen" by AR & Machines.  © 1996-2022, Dusty Groove, Inc.