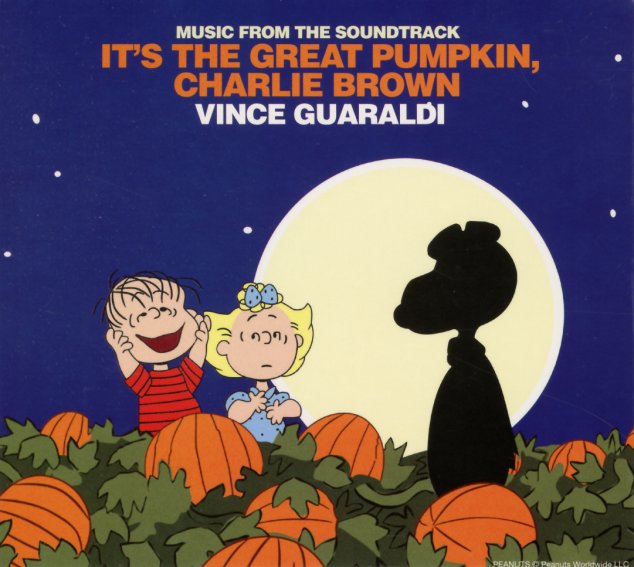 Also available
Vince Guaraldi — It's The Great Pumpkin Charlie Brown (45rpm pressing) ... LP 23.99
The third soundtrack that Vince Guaraldi did for The Peanuts TV specials – and maybe the best so far! There's a depth to the music that's wonderful – as Vince's combo works alongside some occasional larger orchestrations by John Scott Trotter, which are still arranged by Guaraldi – and the core combo adds in the guitar of John Gray, trumpet of Emanuel Klein, and sax and flute of Ronald Lang – the last of which is a particularly expressive sound on the record! The whole thing's worth it alone for "The Great Pumpkin Waltz" – which captures that perfect mix of melancholy and groove that was Guaraldi at his best – and the set also features maybe the best version ever of "Linus & Lucy", thanks to some flute – plus "Trick Or Treat", "Breathless", "Graveyard Theme", "Snoopy & The Leaf/Freida", and "The Charlie Brown Theme". This expanded LP release features a lot of bonus tracks too – a total of 24 titles in all!  © 1996-2023, Dusty Groove, Inc.

It's The Great Pumpkin Charlie Brown (45rpm pressing)
Craft, 1966. New Copy
LP...$23.99 25.99 (LP...$26.99)
The third soundtrack that Vince Guaraldi did for The Peanuts TV specials – and maybe the best so far! There's a depth to the music that's wonderful – as Vince's combo works alongside some occasional larger orchestrations by John Scott Trotter, which are still arranged by Guaraldi ... LP, Vinyl record album

Jazz Giant (180 gram pressing)
Contemporary/Craft, 1958. New Copy (reissue)
LP...$26.99 29.99
A well-titled album from the great Benny Carter – already a giant in jazz, thanks to countless years blowing the alto sax as a leader and sideman in other groups – really opening up a fresh chapter of his career in a great run of smaller combo work in the second half of the 50s! This ... LP, Vinyl record album

It Could Happen To You – Chet Baker Sings (180 gram stereo pressing)
Riverside/Craft, 1958. New Copy (reissue)
LP...$26.99 28.99 (CD...$5.99)
One of Chet Baker's most classic albums of the 50s – a record that features both vocals and strong trumpet solos – all from a time when Baker was one of the hottest things going in jazz! The album's different from records from previous years, in that it moves Baker from LA to New York ... LP, Vinyl record album