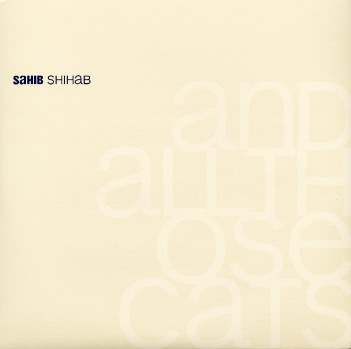 Although reed player Sahib Shihab made a few records in the US in the late 50's, it wasn't until he moved to Europe and started hanging out with the likes of the Clarke-Boland Big Band that his talents really started to flower. This cool new LP brings together 15 small-combo recordings made by Shihab and other members of the CBBB (like Fats Sadi, Benny Bailey, Francy Boland, and Jimmy Woode) during the mid 60's. All the material was recorded by CBBB manager/producer Gigi Campi, and none of the stuff's been issued before as far as we can tell. The groove is nice and swinging, with excellent rolling grooves by Sadi on bongos and vibes. Shihab plays both flute and baritone, and the set swings with the same sort of modal groove as the best Saba/MPS recordings from the time. Cuts include "Campi's Idea", "Dijdar", "Companionship (I + II)", "Peter's Waltz", "Om Mani Padme Hum", and "Herr Fixit". As with the other titles in this series, the music's accompanied by a great package, with loads of excellent photos, good notes, and stellar sound quality. This is the kind of stuff we collect jazz for, and it's great to have it in stock at a nice low price!  © 1996-2022, Dusty Groove, Inc.