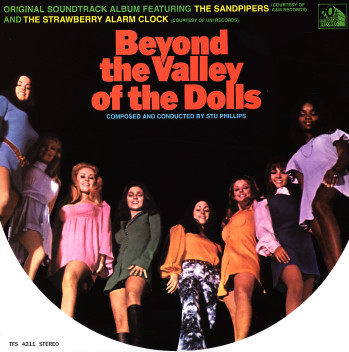 Beyond The Valley Of The Dolls

Classic camp soundtrack to this crazy non-sequel to Valley Of The Dolls. Stu Phillps wrote most of the music, and conducted the instrumental bits, but the bulk of the material's performed by groups like The Sandpipers, Carrie Nations, and Strawberry Alarm Clock. The stuff on here's better than the usual goofy rock soundtrack from the era, and the tracks include "Beyone The Valley Of The Dolls", "Come With The Gentle People", "Find It", "Ampersand", and "I'm Comin' Home".  © 1996-2021, Dusty Groove, Inc.
(Original pressing. NOTE: Vinyl plays through, but has a slight warp and heat damage that is audible through most tracks. Cover is nice, with just a lightly stained corner and minimal wear.)

Funny Thing Happened On The Way To The Forum
United Artists, 1966. Sealed
LP...$7.99
A great early moment for composer Stephen Sondheim – but a score that's made even groovier here by the film work of Ken Thorne! Thorne brings out a sprightly quality to the music that's maybe missing from the original stage score – and his few instrumental passages are especially great ... LP, Vinyl record album

16 Bars
Lightyear, 2019. Sealed
LP...$14.99
An uncommonly soul-steeped hip hop soul soundtrack and musical companion piece to the documentary 16 Bars – spearheaded by Speech from Arrested Development, in which he visited and recorded with incarcerated singers and rappers finding hope in a prison rehabilitation program. The soundtrack ... LP, Vinyl record album