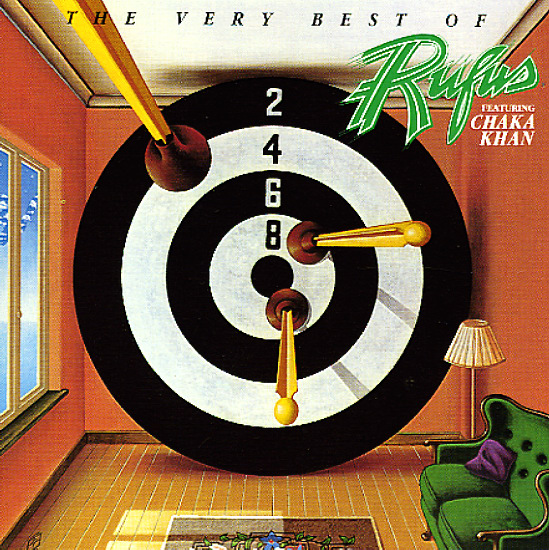 Also available
Rufus — Very Best Of Rufus With Chaka Khan ... CD 4.99
The best early work of this legendary group – a sublime meeting of the incredible vocals of Chaka Khan and the jazz funk goodness of Rufus – one of those 70s blends that so many others tried to copy, but never got this right ever again! Every cut's a gem – well-produced, tightly played, yet still very down to earth – that special way that Rufus had of taking the energy of the AOR generation, yet delivering work that was rock-solidly soulful every time – thanks in large part to Chaka's vocals in the lead! The whole thing's great – and titles include "Dance Wit Me", "At Midnight", "Please Pardon Me", "You Got The Love", "Sweet Thing", "Hollywood", "Tell Me Something Good", "Do You Love What You Feel", "Stay", and "Once You Get Started".  © 1996-2022, Dusty Groove, Inc.

Mac Band Featuring The McCampbell Brothers
MCA/Universal (Japan), 1988. New Copy
CD...$12.99 14.99 (CD...$11.99)
The Mac Band get their name from Charles and Derrick McCampbell – who duet on lead vocals on the set – but they also draw plenty of their sound from the team of LA and Babyface, who handle the leadoff tracks on the set – while also getting plenty of production help from David and ... CD

Long Time Coming
MCA/Universal (Japan), 1986. New Copy
CD...$12.99 14.99
The super-catchy second album from Ready For The World – a group who managed to take an older falsetto soul style from the 70s, and refit things nicely for a more electro-styled 80s groove! The group really make great use of the sorts of beats and keyboards that were bubbling under in the ... CD

Masterjam (with bonus track)
MCA/Universal (Japan), 1979. New Copy
CD...$13.99 16.99 (LP...$19.99)
A definite masterjam from Chaka Khan and Rufus – one of the group's last key efforts together – produced to perfection by the mighty Quincy Jones! Chaka's vocals are sublime right from the start – taking on the soaring majesty she'd use on her initial solo recordings – and ... CD

Shine On Me
MCA/Universal (Japan), 1980. New Copy
CD...$13.99 16.99 (LP...$6.99)
A great batch of boogie from One Way – one of the few late 70s funky combos who were especially well suited to make the transition to 80s groove! The sound here is more electric and keyboard-heavy than previous One Way records – but the group's trademark soul-heavy approach to groove ... CD