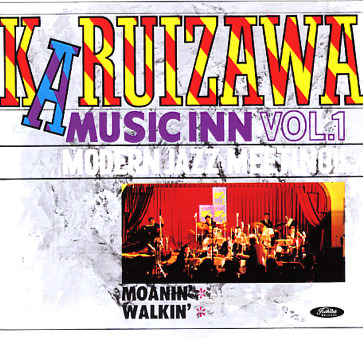 All-star jazz from the Japanese scene of the early 60s – 2 albums' worth of material from some of the greatest players in Japan at the time! The first album in the set is done in a style that almost recalls the Jazz At The Philharmonic mode on Verve – with 2 very long tunes ("Moanin" and "Walkin), each done in side-long takes with plenty of room for solo contributions from players that include Sadao Watanabe, Norio Maeda, Takeashi Inomata, Keitaro Miho, Akira Nakano, and Shungo Sawada – all trading lines with a really spontaneous sense of energy! The second album is tighter and a bit more controlled – with live performances by combos led by Shungo Sawada, Masao Yagi, Norio Maeda, and others – all jamming in hardbop formation on numbers that include "What's Now", "Del Sasser", "Like Someone In Love", "Easy Talking", "Four On Six", and "Alone Together". Together, the records are a great document of the growing energy of the Japanese scene at the time – and beautifully portray the talents of these players in a live setting!  © 1996-2022, Dusty Groove, Inc.
(Out of print, includes obi.)

Trio Conception
Philips (Japan), 1961. Used
CD...$29.99
A straight trio session, but a great one too – played in a way that's both sensitive and grooving, with a sound that's far more than just a copycat of American jazz modes! Even in the early 60s, Jan Huydts already exhibits a richer vision of jazz piano than most of his contemporaries on both ... CD