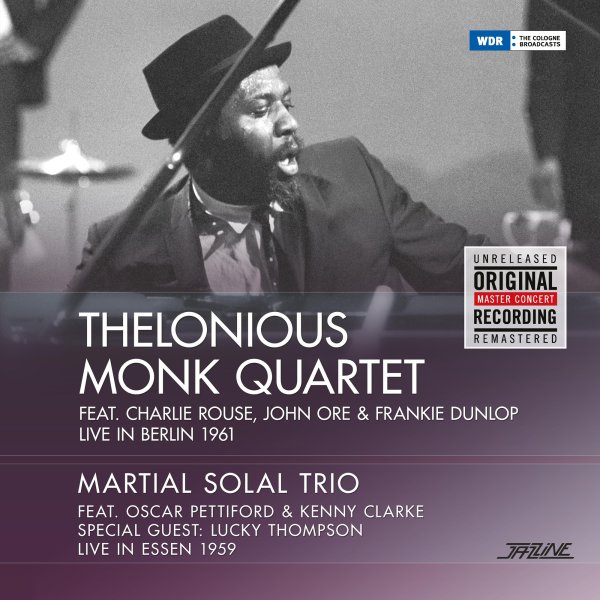 Two giants of modern jazz piano, both performing here on a single set! And no, they don't play together – although we would have loved to hear that – but the live material here shows both musicians in their best light – with Monk's killer quartet with Charlie Rouse on tenor, John Ore on bass, and Frankie Dunlop on drums – stretching out on nice long tracks that include "Crepuscule With Nellie", "I'm Getting Sentimental Over You", and "Rhythm A Ning". But maybe even more interesting is the group with Martial Solal on piano – as it features guest work from Lucky Thompson on soprano sax on two cuts, plus work from Oscar Pettiford on bass and Kenny Clarke on drums! Titles include "The World Awakes", "Yesterdays", "The Squirrel", and "Special Club".  © 1996-2022, Dusty Groove, Inc.

Eddie Harris Quartet – Live At Fabrik Hamburg 1988 (180 gram pressing)
Jazz Line (Germany), 1988. New Copy 2LP Gatefold
LP...$38.99 44.99
A mighty nice late life concert from tenor genius Eddie Harris – and one that has a number of moments that remind us just how special Eddie could be in the right setting! The group here is a bit unusual in that it has a guitar in the lineup instead of a piano – Darryl Thompson on the ... LP, Vinyl record album

Everybody Digs Bill Evans
Riverside/OJC, 1958. New Copy (reissue)
LP...$23.99 25.99 (CD...$2.99)
Everybody Digs Bill Evans – or at least it certainly seems that way from the cover endorsements by Miles Davis, Cannonball Adderley, and Ahmad Jamal – but the real proof is in the record, and the set is a great one from Bill's classic years on Riverside! Evans is at the peak of his ... LP, Vinyl record album