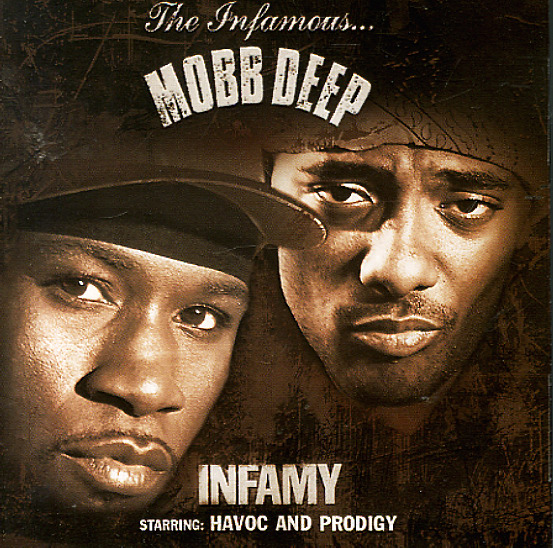 Mobb Deep steps into a new millennium with a slightly bigger sound, but without losing the plot! Long-heralded for being gritty and raw in the best kind of way, Prodigy & Havoc had nothing left to prove on that front – so taking a slight left turn with a more introspective lyrical bent and some sweeter soul backing vocals on the hook is anything but a crime against their legacy if you ask us, it actually deepens it –- especially with the rhymes still in their cornerstone style on a lot of the tracks. 16 tracks in all, including "Get Away", "Bounce", "Hey Luv (Anything)", "The Learning (Burn)", "Get At Me", "Clap", "Crawlin", "There I Go Again" with Ron Isley, "I Won't Fall" and more.  © 1996-2023, Dusty Groove, Inc.
(20th Anniversary edition – limited and numbered!)

Only Built 4 Cuban Linx (yellow & white vinyl pressing)
Loud/Get On Down, 1995. New Copy 2LP Gatefold (reissue)
LP...$30.99 34.99
Chef Raekwon cooks up one of finest hip hop albums in history – a standout moment in the Wu Tang canon and the 90s in general! Given Ghostface's presence throughout, the prime RZA production and other top shelf guests, you could almost call this one a Wu Tang Clan album, if not for Raekwon's ... LP, Vinyl record album

Pinata – 1984 Version
Madlib Invazion, 2021. New Copy
LP...$25.99 27.99
Streetwise raps from Freddie Gibbs, backed by inventive production from Madlib – here on one of the best records yet on 'Lib's own Madlib Invazion imprint! If you'll forgive us a little bit of repetition – because we KNOW we've written this before – there's just something extra ... LP, Vinyl record album

Tougher Than Leather (blue vinyl pressing)
Profile/Get On Down, 1988. New Copy (reissue)
LP...$21.99 24.98 (CD...$5.99)
A once underappreciated later effort from the mighty Run DMC – with slightly harder hitting beats, and an overall terse style (hence the title) that was always more effective than it got credit for at the time – and it's ultimately the crew's last solid beginning-to-end LP! Of course ... LP, Vinyl record album

2001
Aftermath/Interscope, 1999. New Copy 2LP (reissue)
LP...$27.99 29.99
Dre's solid and hugely successful follow-up to The Chronic, and production-wise it holds up really well after all these years! Chronic set the sound bar so high, even 6 or 7 years later its shadow loomed large, but Dre delivers a headnodding groove that was pretty tough to resist, then and now. The ... LP, Vinyl record album