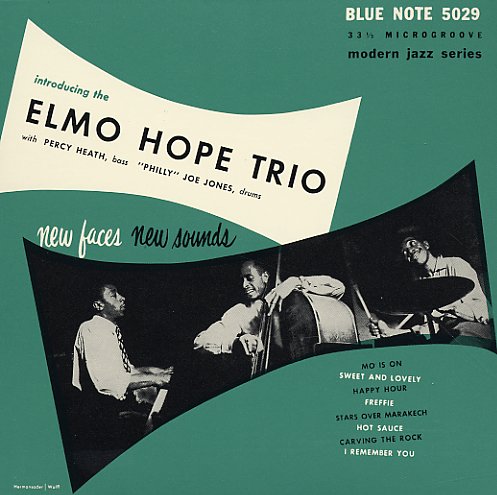 Seminal early work from Elmo Hope that was part of Blue Note's "New Faces – New Sounds" series during the early 50s. Hope's working here with Percy Heath and Philly Joe Jones – and the trio go to town on numbers that include complicated bop tunes like "Carving The Rock" and "Hot Sauce", plus more melodic tunes like "Freffie" and "Mo Is On". As always, Hope proves himself to be one of the greatest pianists in jazz history – right up there with Monk, Herbie Nichols, and Bud Powell, bristling with excitement that few of his contemporaries (save those three) could match! This 12-inch issue also includes the bonus track "It's A Lovely Day Today".  © 1996-2022, Dusty Groove, Inc.
(140 gram EU Doxy/Down At Dawn pressing.)

Cornbread
Blue Note, 1965. Sealed
LP...$26.99 (CD...$9.99)
A rock-solid sextet session from the mighty Lee Morgan – recorded for Blue Note at the height of his mid 60s powers, and carried off in a beautiful blend of soul jazz and some slight modern touches! The group here is top-shelf all the way through – Jackie McLean on alto, Hank Mobley on ... LP, Vinyl record album

Genius Of Modern Music Vol 1
Blue Note, Early 50s. Near Mint-
LP...$29.99 (CD...$1.99)
A great collection of Monk's 10" recordings for Blue Note – seminal not only for the label's commitment to a modernist bop ideal, but also for Monk's integration in the growing collection of top-level jazz players on the New York scene. The work's notable also for the fact that Monk's ... LP, Vinyl record album

One Night With Blue Note Preserved Vol 2
Blue Note, 1985. Near Mint-
LP...$3.99
A landmark concert from the mid 80s – one held to honor the resurrection of the Blue Note label, featuring a wealth of some of the best players for the label – from the 80s back to the 50s bebop years. This is the second of 4 LPs, issued both separately and in a box set format, and ... LP, Vinyl record album

One Night With Blue Note Preserved Vol 1
Blue Note, 1985. Near Mint-
LP...$9.99
A landmark concert from the mid 80s – one held to honor the resurrection of the Blue Note label, featuring a wealth of some of the best players for the label – from the 80s back to the 50s bebop years. This first volume in the 4 LP series features centered around Herbie Hancock and ... LP, Vinyl record album