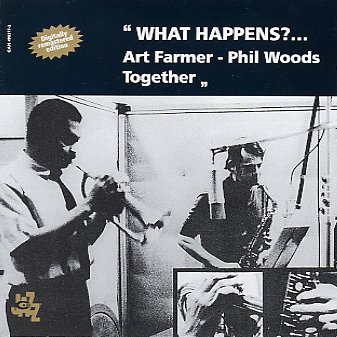 What happens when Art Farmer and Phil Woods get together? Some pretty magical music – and a set that's quite different than most of their other 60s recordings! The session is a special date – put together by Clarke-Boland Band impresario Gigi Campi – with Farmer's flugelhorn and Woods' alto backed by a very cool French rhythm trio – which features Martial Solal on piano, Henri Texier on bass, and Daniel Humair on the drums! The group's a bit more modern than some of Art's usual combos, which makes for really surprising results, and often a much harder sound – one that matches the growing intensity of Woods during this part in his career. The tracks are long and openly grooving – and titles include "Blue Bossa", "Watch What Happens", "Blue Lights", "Sunrise Sunset", and "The Day After".  © 1996-2022, Dusty Groove, Inc.