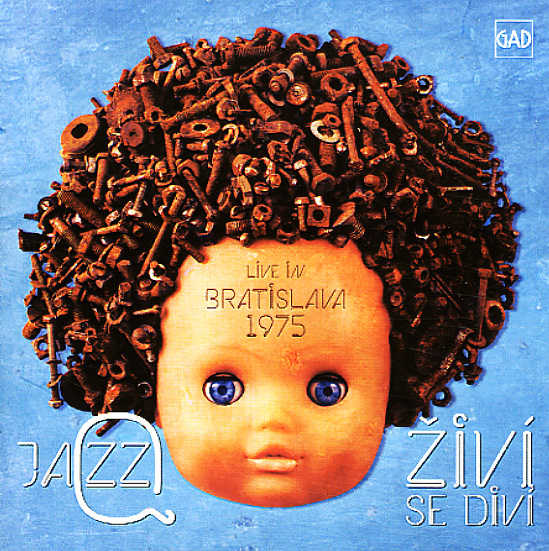 Genius live work from Jazz Q – one of the most important groups on the Eastern European scene of the 70s – heard here in a previously unissued performance! The music here is even more electrifying than that on any of the full albums issued by Jazz Q – as it's got a more freewheeling, open-ended style – one that definitely shows the group's love of and inspiration from the groundbreaking work of Herbie Hancock and John McLaughlin in the 70s! The tracks spin out with stellar solos on both Fender Rhodes and guitar – still with echoes of the group's rock roots, but plenty jazzy overall – really showing the Jazz Q shift at the time, with a dexterity that's simply mindblowing in this spontaneous setting. Only a few of the cuts have vocals, and most are long instrumentals – with titles that include "Sanctuary", "Stratus", "Lonesom", "Tun", "Freedom Jazz Dance", "Zivi Se Divi", and "Mlyn".  © 1996-2022, Dusty Groove, Inc.

Hodokvas (plus bonus tracks)
GAD (Poland), 1980. New Copy 2CD
CD...$22.99 24.99
A set that features one of the biggest albums ever from this famous Czech fusion combo – complete with a full bonus CD of mostly-unissued tracks! The core Hodokvas album represents a nice shift for the Jazz Q group of keyboardist Martin Kratochvil – a slightly tighter sound than the ... CD

Promienie Dzwieku
GAD (Poland), Mid 80s. New Copy
CD...$19.99 22.99
Well-crafted fusion from Polish guitarist Winicjusz Chrost – maybe not a household name in jazz, but a musician who can definitely deliver at a level that matches the bigger names in the Western scene at the time! The cuts here mix lean lines on guitar with some fuzzier moments that echoes ... CD