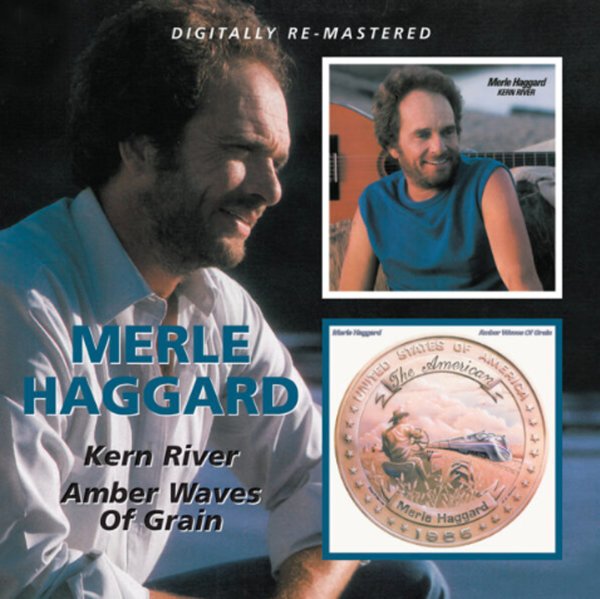 Two mid-80s sets from Merle Haggard – back to back on a single CD! First up is Kern River – a real classic from the Epic Records years of Merle Haggard – a set that has both the singer and the label realizing that one of the strongest suits of Hag's style at the time was his maturity – which is brought to light here in a great set of blue-tinged tunes filled with themes of loss and looking back! Grady Martin co-produced the set with Merle, and there's an easygoing vibe here that never pushes Haggard's vocals too much – and instead really revels in the gentler tones and more personal aspects of his voice. Titles include the classic "Kern River" – plus "Old Flames Can't Hold A Candle To You", "There Won't Be Another Now", "I Wonder Where I'll Find You At Tonight", "You Don't Love Me Any More", and "There's Somebody Else On Your Mind". Amber Waves is a later live set from Merle Haggard – one that echoes some of the attitudes of his famous concert recordings for Capitol, but which also has some nicely different qualities too! As with those albums, Merle's definitely pitching some of the ideas and politics towards a more populist audience – but he's also reveling in some of the more mature modes of his Epic Records years – sliding into some of the mellower tunes with the confidence that he often brought to his more uptempo early hits. Titles include "I Wish Things Were Simple Again", "Amber Waves", "American Waltz", "The Farmer's Daughter", and "Gone With The Wind" – plus cool medley cuts "Tulare Dust/Mama Tried", "The Okie From Muskogee's Comin Home/The Okie From Muskogee", and "Working Man's Blues/Always Late With Your Kisses".  © 1996-2022, Dusty Groove, Inc.