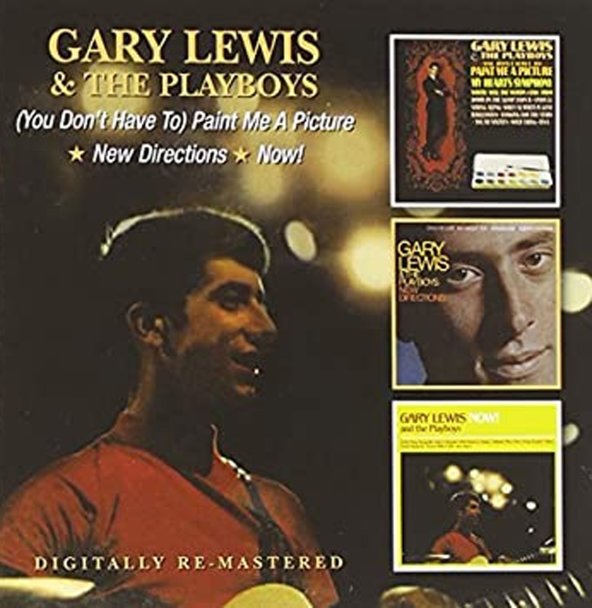 Three classic albums from Gary Lewis & The Playboys – all brought together in a single set! First up is You Don't Have To Paint Me A Picture – wonderfully groovy work from Gary Lewis and his Playboys – just the sort of west coast pop masterpiece that Liberty Records could come up with when they were doing things this right! Production is by Snuff Garrett, with lots of Leon Russell arrangements in the studio – and although Gary's vocals are great and super-catchy, the guitars, basslines, and all the other great bits recorded for the backings hold our attention just as much! Titles include "String Along", "Tina", "My Heart's Symphony", "Looking For The Stars", "When Summer Is Gone", "Where Will The Words Come From", and "You Don't Have To Paint Me A Picture". New Directions is a set that doesn't really have Gary Lewis taking that many new directions – he doesn't grow his hair and become a hippie – but a set that does have a few nice changes from his other Liberty work at the time! Arrangements here are by Jack Nitzsche and Nick DeCaro – both of whom bring in some superb LA touches to the tunes – and Gary himself seems to take a bit more time with some of the lyrics, almost as if he's been listening to the maturing side of the British scene, and wants to get past the simple catchiness of his hits. The whole thing makes for a nice change – and titles include "Girls In Love", "Double Good Feeling", "Here I Am", "Hello Sunshine", "New In Town", "Slow Movin Man", and "Me About You". Now is one of the last albums in Gary Lewis' famous 60s run for Liberty Records – and a set that makes for a nice sendoff overall! A lot of the material here was handled by other artists first – and it's bit like Lewis is letting the others of the groovy 60s set the tone for him here – but with great Snuff Garrett production and Al Capps arrangements, things are rock-solid throughout – and Gary's got no trouble bringing out the catchiest corners of tunes that include "Windy", "I Wonder What She's Doing Tonight", "Sealed With A Kiss", "Young Girl", "Judy In Disguise", Sunny", and "What Am I Gonna Do".  © 1996-2023, Dusty Groove, Inc.