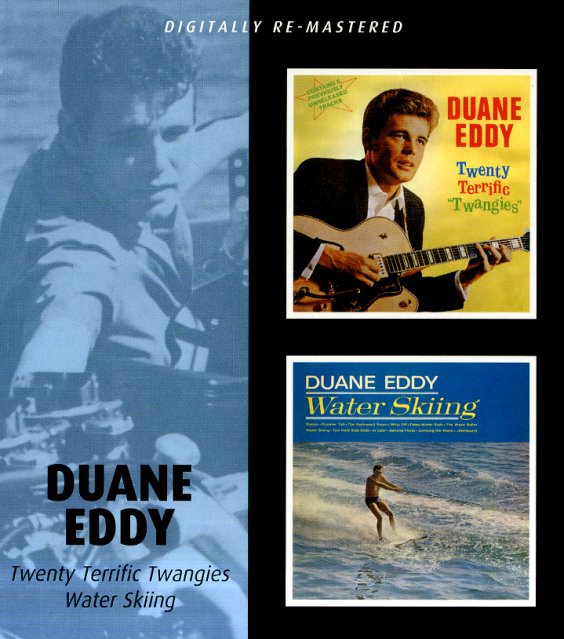 Two different albums on one CD – both of which are full of the legendary guitar work that made Duane Eddy huge in the early 60s! First up is Twenty Terrific Twangies – a UK collection that brings together some of the best early RCA material by Eddy – a good deal of which was handled by superproucer Lee Hazlewood – whose work with Duane predated his hits with Nancy Sinatra! Some cuts have vocals, most are instrumental – and titles include "The Feud", "Stretchin Out", "Guitar Man", "Country Twist", "Mirriam", "The Last Dance", "Twangsville", "Jerky Jalopy", "Boss Guitar", and "Rebel Rouser". On Water Skiing, Duane's twangy guitar sound is applied to the water skiing scene, in what was probably an attempt to establish a new trend away from surf or hot rod instrumentals. The sound, however, is very much in the surf/hot rod style – with lots of groovy "twang" out front, and zippy backgrounds that have a swinging sound to them. Titles include "Water Skiing", "Rooster Tail", "In Gear", "Jumping The Wake", "Banana Peels", and "Toe Hold Slide Slide".  © 1996-2022, Dusty Groove, Inc.