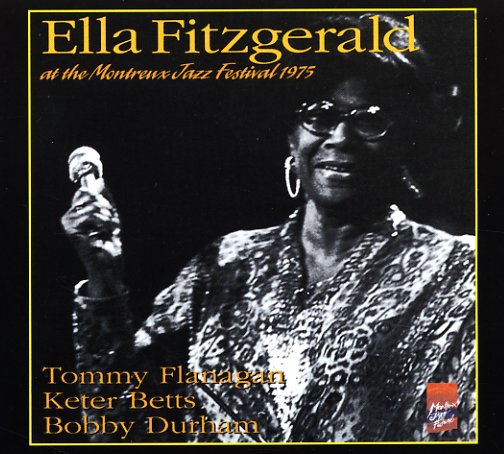 At The Montreux Jazz Festival 1975

Things Ain't What They Used To Be (And You Better Believe It)
Reprise/Collectables, 1971. Used
CD...$8.99
Ella gets groovy – and we love it! This album's one of a rare few that has Ella Fitzgerald breaking the mode of her more traditional vocal sessions – a surprising groover that features Gerald Wilson backing Ella with a great blend of soul, jazz, and bossa styles! By the time of the ... CD

Ella At Duke's Place
Verve, 1965. Used
CD...$5.99
A beautiful classic from mid 60s Verve – and the kind of a session that we wouldn't have expected to come off so well! In a style they were using with older artists at the time, Verve brought Ella and Duke into the studio together – with Duke's band and compositions providing the ... CD

Fitzgerald & Pass – Again
Pablo, 1976. Used
CD...$6.99 (LP...$11.99)
Ella Fitzgerald and Joe Pass return to the studio just a few years after their initial meeting – once again to work in a stripped-down duet format that's completely sublime! The spare setting is one that Ella never got in the older days – and there's an intimacy here that almost makes ... CD