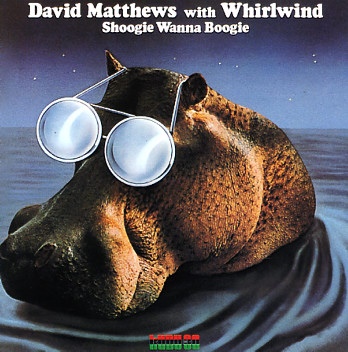 One of the slickest of Dave Matthews' funk records from the 70s – but still pretty darn nice! Matthews was the mainman behind the legendary funk group The Grodeck Whipperjenny, and a key arranger in James Brown's sound of the Polydor years – but by this time, he moved into smoother club-type jazz, of the sort he'd penned for Idris Muhammad and other artists on the Kudu label. However, Matthews' always had a talent for the funky groove – and even these otherwise pop disco numbers shine with a musical intensity that surprises us – especially at moments like the funky drumbreak on "You Keep Me Hanging On", the freaky moog on "Shoogie Wanna Boogie", the funky bass solo on "California Dreaming", and the excellent keyboard work on "Gotta Be Where You Are".  © 1996-2022, Dusty Groove, Inc.
(Out of print.)

My Favorite Things – Live In Tokyo
Paddle Wheel/King (Japan), 1987. Used
CD...$18.99
The Manhattan Jazz Quintet play live in Tokyo – quite a good fit, given that most of their albums of the time were originally produced just for the Japanese market! The group's at their rock-solid best – with rhythms that are complex, yet always right on the money – thanks to ... CD

Gaddabout
Electric Bird/King (Japan), 1984. Used
CD...$11.99
A sweet little album from drummer Steve Gadd – one that will more than make you forgive the title's wordplay on his last name! Steve's drums give the record a nice sort of punch that's sometimes missing from 80s fusion of this nature – a rhythm approach that still has the spontaneous ... CD

Song Is You & Me
Electric Bird/King (Japan), 1980. Used
CD...$11.99
Guitarist Yoshiyaki Masuo can jam when he wants to, but also has a great way of hitting these laidback mellow lines that are totally great – as you'll hear on this classic set recorded with help from a host of top-shelf American fusion players! The tracks have a nice, focused sort of vibe ... CD