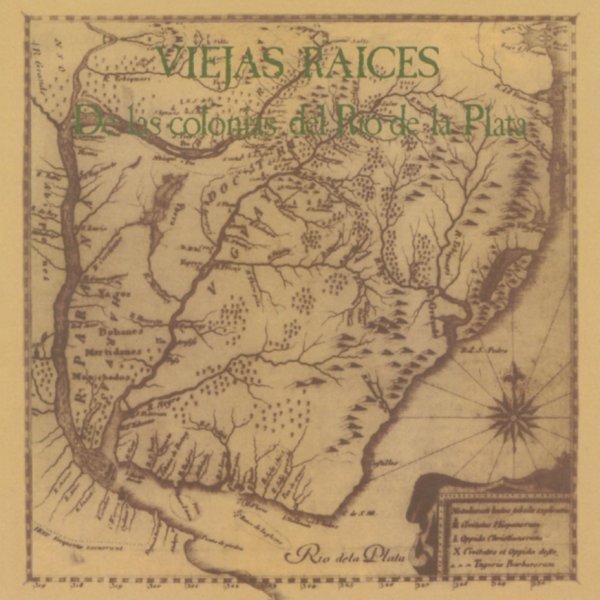 One of the coolest records we've ever heard from this legendary Argentine pianist – a set that has Jorge Lopez Ruiz playing lots of Fender Rhodes, and mixing it in with both rootsy Latin percussion and a number of other keyboards too! The set's almost a South American version of some of Herbie Hancock's work with the Headhunters – with more traditional percussion passages in the mix, but blended with sounds that include Arp and mini-moog too – which gives the whole thing a criss-crossing vibe that alternates from the surface of the planet to the deeper ranges of the cosmos! Ruiz is wonderful throughout – often very spacious, in a thoughtful way that only makes each note have more power – and titles include "La Hora De La Sed Maldita", "Eterna Prescencia", "Mira Tu", "El Viaje De Dumpty", "Balewada", and "Para Nostros Solamente".  © 1996-2023, Dusty Groove, Inc.

Viejas Raices De Las Colonias del Rio De La Plata
Trova/Altercat (Germany), 1976. New Copy
CD...$16.99 19.99 (LP...$24.99)
One of the coolest records we've ever heard from this legendary Argentine pianist – a set that has Jorge Lopez Ruiz playing lots of Fender Rhodes, and mixing it in with both rootsy Latin percussion and a number of other keyboards too! The set's almost a South American version of some of ... CD

Ju Ju Man/Love Song
Catalyst/Fresh Sound (Spain), Mid 70s. New Copy
CD...$15.99 18.99
Two overlooked albums from Gary Bartz – back to back on a single CD! First up is Ju Ju Man – a rare treat from saxophonist Gary Bartz – material recorded for a small west coast label after his initial classics on Prestige Records – but in a vibe that's different than the ... CD

Valencia (Japanese paper sleeve edition)
Trio/Ultra Vybe (Japan), 1980. New Copy
CD...$20.99 24.99
Percussionist Masahiko Togashi works here with superb piano accompaniment from Takashi Kako – a player whose sense of touch and tone is as unique as Togashi's work on the drums! Kako brings these sounds out of the piano that are almost guitar-like at times – not strummed, but with an ... CD

First Flight – Complete Recordings
Catalyst/Fresh Sound (Spain), 1976. New Copy 2CD
CD...$24.99 28.99
Wicked work from saxophonist Don Menza – really stretching out here in a massively beautiful 70s session for Catalyst Records! Menza was a heck of a player, but one who mostly kept things pretty close to the chest – yet on this album, he blows with a soulful, flowing tone that's simply ... CD

Soul Jazz (with bonus tracks)
EMI/Fresh Sound (Spain), 1960/1961. New Copy
CD...$15.99 18.99
One of the most hard-hitting albums ever cut by pianist Georges Arvanitas – an early effort that's all soul jazz all the way through! Although Arvanitas is best known as a committed modernist, especially in later years, this sweet early 60s session is a stone cooker in the best mode of Blue ... CD