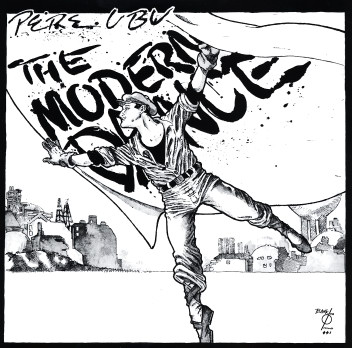 Also available
Pere Ubu — Modern Dance ... LP 49.99
A seminal album from the American underground of the late 70s – the unexpected debut of Pere Ubu, bursting forth from the Cleveland scene with a sound to challenge the greatness of anything coming from New York or LA at the time! The album's not exactly punk, not exactly art rock, but has strong elements of both – all wrapped around the unique conception of singer Dave Thomas, whose vocals are some of the oddest ever recorded! The tunes here are a lot more straightforward and upfront than some of Pere Ubu's later work – in a way that definitely makes the album their biggest favorite with continuing new generations of indie rockers. But there's also still a fair number of more experimental touches too – odd sonic tricks and almost-abstract moments that were quite revolutionary for the time – especially from Cleveland! Titles include "Non Alignment Pact", "The Modern Dance", "Chinese Radiation", "Real World", "Life Stinks", "Over My Head", and "Humor Me".  © 1996-2022, Dusty Groove, Inc.
(Limited edition white vinyl pressing – includes download!)