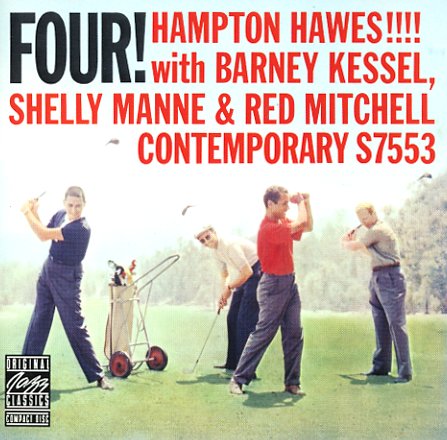 The record cover's got the group out on the golf links – but don't worry, when they got into the studio, they really got back to work – providing superb backing for the young, unique pianist Hampton Hawes – who really knows how to shine on a session like this! Tracks are longer than most piano jazz albums of the time, and really show that growing sense of fluidity that Hawes was unlocking on the keys – echoed perfectly by the guitar work of Barney Kessel, who seems to maybe have a bit more bite here than usual, especially when Hamp's attacking the left side of the keyboard. Bass is by Red Mitchell, drums by Shelly Manne – and titles include "Yardbird Suite", "Up Blues", "Bow Jest", and "Like Someone In Love".  © 1996-2022, Dusty Groove, Inc.

It's The Great Pumpkin Charlie Brown (45rpm pressing)
Craft, 1966. New Copy
LP...$23.99 25.99 (LP...$26.99)
The third soundtrack that Vince Guaraldi did for The Peanuts TV specials – and maybe the best so far! There's a depth to the music that's wonderful – as Vince's combo works alongside some occasional larger orchestrations by John Scott Trotter, which are still arranged by Guaraldi ... LP, Vinyl record album

It's The Great Pumpkin Charlie Brown (orange vinyl pumpkin-shaped pressing – with bonus tracks)
Craft, 1966. New Copy
LP...$26.99 29.99 (LP...$23.99)
The third soundtrack that Vince Guaraldi did for The Peanuts TV specials – and maybe the best so far! There's a depth to the music that's wonderful – as Vince's combo works alongside some occasional larger orchestrations by John Scott Trotter, which are still arranged by Guaraldi ... LP, Vinyl record album