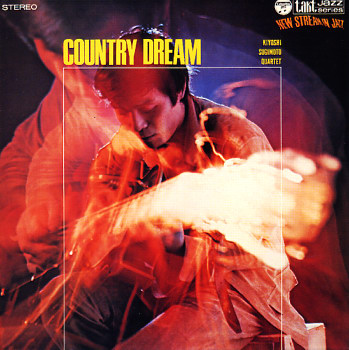 Nothing "country" about this record – as Japanese guitarist Kiyoshi Sugimoto keeps things very hip and contemporary – working in a freely fluid style that also has a few funky touches as well! The group on the set is a quartet – with Kiyoshi's guitar amidst piano, bass, and drums – the last of which are played by Motohiko Hino with a nice little snap that brings a groove to the record, even when the tunes are long and open-ended. Sugimoto's got a richly chromatic way of playing the guitar that's really great – a sound that would have been very much at home on a Gary Burton album from the late 60s, but which comes across even better here in the wonderfully creative style of the session. Tracks are all longish, and titles include "D-51", "Limited Space", "Step Ahead", "The Apple", and "Country Dream".  © 1996-2022, Dusty Groove, Inc.
(Fantastic pressing, just like the original – heavy gatefold cover with obi!)