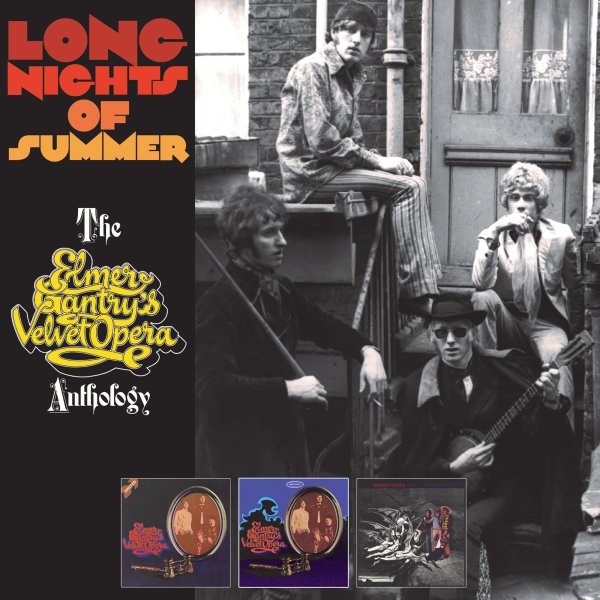 Elmer Gantry's Velvet Opera weren't the biggest group on the British scene of the late 60s, but they were certainly one of the coolest – as you'll hear on this massive collection that brings together all their key work of the time! First up is the self-titled debut album – stunner of a set from a group who should have been huge – especially given the sharpness and wit of this debut album! Elmer Gantry's Velvet Opera bring together all the best strands of up and coming Brit rock of the time – a bit of psych undercut with some bluesy elements, marked by a moddish smirk that really keeps the whole thing punched-up throughout – no overindulgence, no easy mark for a hit – just a very individual sensibility that few of the group's underground contemporaries could match! These guys come across with all the personality of The Who in Happy Jack/Magic Bus years – and have a similar use and distance of trippy elements of the time – almost tongue in cheek, but just because they find a way to shift between them and straighter rock so easily. Songs are all great, and really well-written – and apart from a version of Oscar Brown Jr's "I Was Cool", the set features original material that includes "Mother Writes", "Mary Jane", "Flames", "Lookin For A Happy Life", and "Walter Sly Meets Bill Bailey". Next is the group's second album Ride A Hustler's Dream – a set that maybe has the group bringing in more blues influences to the music at times, but mostly as a way to let both the guitar work and vocals get even fuller and strongly expressed – which means that when the psychedelic elements come into the mix, there's an even more powerful vibe than on their debut album too! Titles include "Black Jack Davy", "Ride A Hustler's Dream", "Honey By", "Anna Dance Square", "Depression", "Warm Day In July", and the very cool "Raga" – and a great remake of "Eleanor Rigby". 3CD set features the debut album in a rare promo-only mono mix, plus 34 bonus tracks that include "There's A Hole In My Pocket", "She Keeps Giving Me These Feelings", "The Painter", "And I Remember", "Talk Of The Devil", "Dreamy", "Volcano", "A Quick B", and lots more – including singles and BBC tracks too!  © 1996-2023, Dusty Groove, Inc.