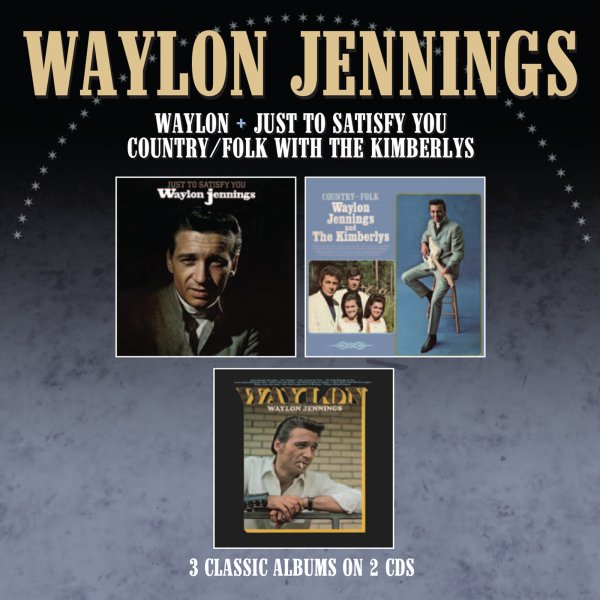 A trio of pre-stardom albums from Waylon Jennings – brought together here in a single set! First up is Just To Satisfy You – fantastic early work from Waylon Jennings – exactly the kind of record that shows how the singer could burst out of the pack, even in a familiar setting! There's still a lot of Chet Atkins elements in the production, but Waylon really pushes all that aside with his upfront, honest vocal approach – so much so that even hits by others are completely transformed in his style! Titles include "Farewell Party", "Sing The Blues To Daddy", "Straighten My Mind", "Just To Satisfy You", and "Lonely Weekends" – plus duets with Anita Carter on "I Got You" and "Rings Of Gold". Next up is Country Folk – one of the most unusual albums ever recorded during the early RCA years of Waylon Jennings – a set that features backing vocals from the male/female quartet The Kimberlys – of the sort that you might have heard from the Anita Kerr Singers on a Chet Akins production – but tuned much more towards a style that suits Waylon well! There's none of the too-sweet modes that Kerr might bring into the mix – and there's also occasional female leads that appear for a bit, creating a sense of duet with that magnificent Jennings voice – further deepened by the great choice of material, too – really unusual tracks that aren't the sort that RCA was usually adding to country sessions at the time. Titles include Jimmy Webb's immortal "MacArthur Park", plus "These New Changing Times", "Come Stay With Me", "Cindy Oh Cindy", "Games People Play", "Mary Ann Regrets", "Let Me Tell You My Mind", "Long Way Back Home", and "A World Of Our Own". Last up is Waylon – pivotal work from Waylon Jennings – a record that has him really starting to show the maturity and individuality that would make his mid 70s hits so great! Production here isn't that different than before – Chet Atkins and Danny Davis are still at the helm in the studio – but Waylon himself has really blossomed, and gone from being just an already-great country singer to a mature male interpreter of tunes – able to bring his own spin to material from an array of well-chosen sources. Anita Carter duets with Waylon on two tracks – and titles include "Brown Eyed Handsome Man", "Don't Play The Game", "The Thirty Third Of August", "Yellow Haired Woman", "This Time Tomorrow (I'll Be Gone)", "Where Love Has Died", "I May Never Pass This Way Again", and "Just Across The Way".  © 1996-2022, Dusty Groove, Inc.