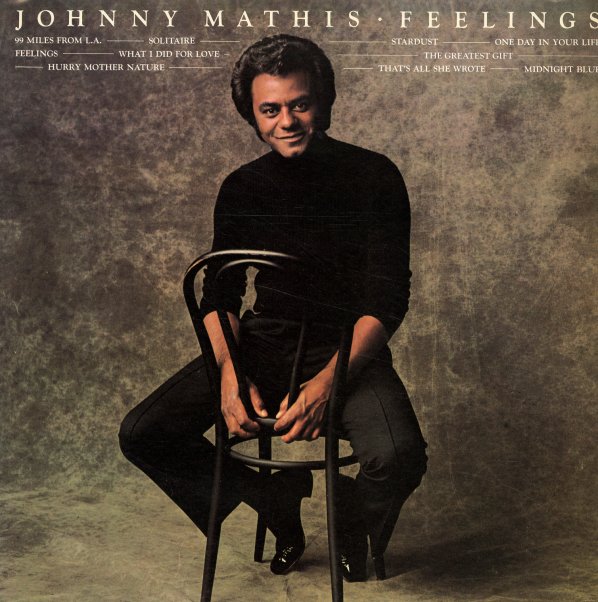 Different Kinda Different
Columbia, 1980. Near Mint-
LP...$0.99
A tremendous start to the 80s for Johnny Mathis – and a set that really continues that strong shift into soul-based territory he begun in the 70s! Gene Page handles a lot of the arrangements here, and gives the whole thing that strong blend of strings and soul that he worked on other 70s ... LP, Vinyl record album

In Person
Columbia, 1972. Near Mint- 2LP Gatefold
LP...$1.99
A double-length live set from Johnny Mathis – recorded live in person in Las Vegas – with titles that include a fair number of medley tracks that are a nice change from his studio records – the kind of material that really allows Johnny to show his talents as an entertainer in a ... LP, Vinyl record album

I'm Coming Home
Columbia, 1973. Near Mint-
LP...$3.99
Johnny Mathis gets a great new sound here – thanks to Philly production and arrangements from the great Thom Bell! Thom had quite a hand in the songs, too – as almost all numbers were written by the team of Bell and Linda Creed – really sensitive songwriters who've got an adult, ... LP, Vinyl record album

This Is Love
Mercury, 1964. Very Good+
LP...$0.99
Great arrangements really make this one sparkle – thanks to backings from Allyn Ferguson, done in that perfect mix of soft strings and shimmering brass that seems to work best for the vocals of Johnny Mathis! The album's got a feel that's full, but never in a too-lush or sleepy way – ... LP, Vinyl record album

Killing Me Softly With Her Song
Columbia, 1973. Very Good
LP...$2.99
Johnny Mathis riding high in the early-to-mid 70s! Johnny takes on a mix of sweet & tender and more melancholy tunes on Killing Me Softly, showing a surer hand at making some then contemporary hits his own better than just about any veteran pop vocalist of his generation. Jerry Fuller produced ... LP, Vinyl record album

Best Days Of My Life
Columbia, 1979. Very Good+
LP...$2.99
Johnny Mathis at the end of the 70s – still working in some of the best soul modes he explored during the decade, but also reaching forward in a more adult sort of style too! The album has Mathis working with arrangements from Gene Page – who balances things between some fuller soul ... LP, Vinyl record album

Sarah Vaughan In Hi Fi
Columbia, 1955. Very Good
LP...$13.99
One of Sarah's few albums for Columbia – and quite possibly the best, thanks to some great small group backing, heard on 8 of the album's 12 tunes! The group's a really great one – with Miles Davis on trumpet, Benny Green on trombone, Buddy Johnson on tenor, Tony Scott on clarinet, ... LP, Vinyl record album