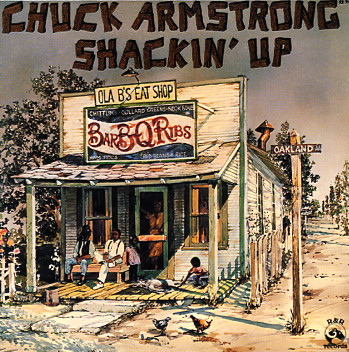 An obscure album of southern funky soul from Chuck Armstrong – an artist we know from his earlier funky 45 work in Chicago, but who sounds quite different on this set! The album was produced by George Kerr in New Jersey, but it's got a rolling, vamping approach on most cuts – a sound that's somewhere between Muscle Shoals and the nascent Jackson style of the 70s – a bit smoother than 60s deep soul, but still with a mighty nice edge – and handled perfectly by Kerr! Chuck's vocals are well-suited to the set, and a few numbers bear traces of his earlier more northern sound – and the whole thing's the kind of rare soul killer that only turns up once in a blue moon. Titles include "Sweet Foxy Woman", "You Got To Deal With It", "Shackin Up", "Goodness Gracious", "I'm A Lonely Man", "She Had The Right", and "Nightmare".  © 1996-2022, Dusty Groove, Inc.
(Limited edition on "Barbecue Sauce" red vinyl!)