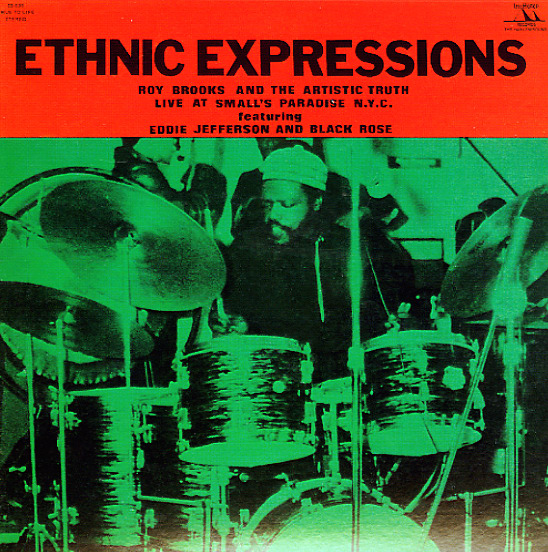 Also available
Roy Brooks — Ethnic Expressions – Live At Small's Paradise NYC (Japanese paper sleeve edition) ... CD 19.99
Amazing sounds from drummer Roy Brooks – very spiritual work that's quite a change from his straighter soul jazz of the 60s! The album's right up there with Roy's better-known (though still rare) live performance at Town Hall – or his classic Free Slave session – and like those records, this one explodes with a raw power that's really amazing – heavy drums from Brooks, driving a collective of righteous musicians that really stretch out in the free space of the recording! The clineup shifts a bit from track to track, but there's a cohesive spirit to the record that comes from Brooks' bold spirit – a joyous, soulful, post-Coltrane sort of energy – let loose in the lead, to guide the talents of players who include John Stubblefield on tenor, Sonny Fortune on alto, Olu Dara and Cecil Bridgewater on trumpets, Hamiet Bluiett on baritone sax, Joe Bonner on piano, and Reggie Workman on bass. Eddie Jefferson makes an appearance on two tracks – singing much hipper than on any of his better-known recordings of the period – and titles include "The Last Prophet", "M'Jumbe", "Eboness", "The Smart Set", and "Eboness (Kwanza)".  © 1996-2023, Dusty Groove, Inc.