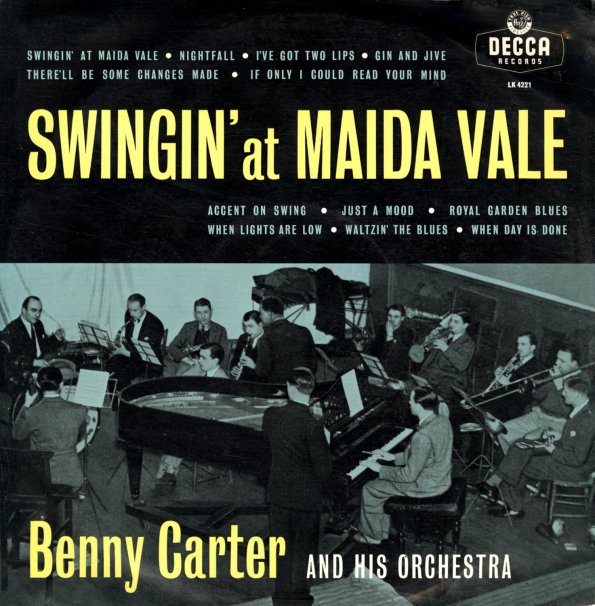 A rare early example of the strength of an American jazz musician working overseas – as alto genius Benny carter steps out here with British players in a few different sesssions from 1936 – some relatively small combo, with nice work on guitar from Albert Harris, alto from Freddy Gardner, and trombone from a young Ted Heath!  © 1996-2023, Dusty Groove, Inc.
(Late 50s red label pressing in a flipback cover. Cover has some edge wear, bent corners, and a small tear in the opening. Labels have sticker remnants.)

Colors In Sound – Sal Salvador Quartet With Brass
Decca, Late 50s. Very Good+
LP...$16.99
A beautiful title for a beautiful session – one that unlocks the tones and hues in Sal Salvador's guitar work! Sal's working here with arranger George Roumanis, who brings some real Kenton-like touches to his backings for Salvador's guitar solos on the sessions – and like Stan, he ... LP, Vinyl record album

Boss Tres Bien (Decca pressing)
Decca, 1964. Very Good
LP...$11.99
A landmark blend of soul jazz and bossa nova – cut by the legendary Quartette Tres Bien back in the 60s! The group are kind of a "piano trio plus" – an outfit with piano, bass, and drums in the lead – but also plenty of conga and added percussion – a style used ... LP, Vinyl record album

Star Dust (aka Gene Norman Presents Just Jazz)
Decca, 1947. Near Mint-
LP...$1.99
One of the few albums to really get at the genius of the Lionel Hampton group at the height of their powers – their crowd-pleasing antics that were always a big draw for live audiences! This set catches Hamp and a great group at the Pasadena Civic Auditorium – playing on long tracks ... LP, Vinyl record album