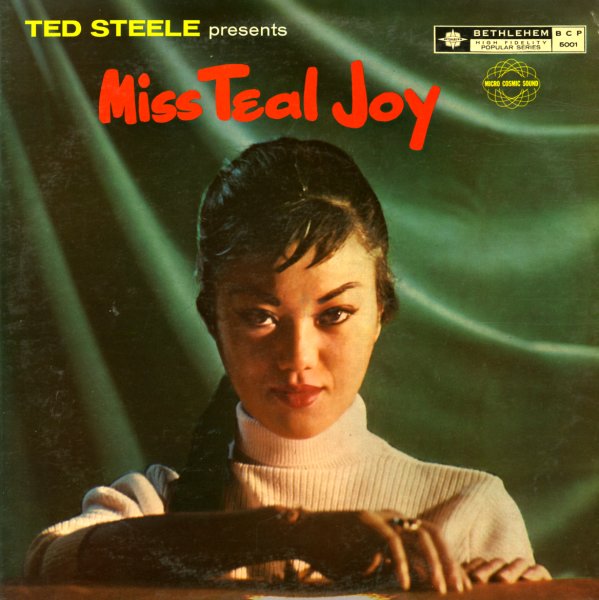 A great little album from this overlooked singer – an east coast vocalist from the 50s, working here on one of the few sessions she ever recorded! Teal's got an exotic look on the cover, but the presentation of the music is right up there in the best mainstream jazz modes of the time – and unlike some of the other small combo vocal work on Bethlehem in the 50s, this album has the fuller feel of the sorts of records you might hear on a label like Capitol or Verve at the time. Ted Steele handles the arrangements – and is also credited with discovering Teal in Atlantic City – and the backings are a mix of jazzy flourishes and larger strings – never poppy or overdone. Titles include "Autumn Leaves", "El Cumbanchero", "Deed I Do", "For You My Love", "Who's Sorry Now", "Let's Fall In Love", and "Easy To Remember". CD also features three bonus alternate takes!  © 1996-2022, Dusty Groove, Inc.
(Includes obi.)

Bethlehem Years
Bethlehem/Shout Factory, Late 50s. Used
CD...$3.99
Excellent work from Mel Torme – material recorded in the late 50s for Bethlehem Records – easily one of our favorite periods in the career of the Velvet Fog! The tunes here are tremendous – numbers that are tightly jazzy, often with hip west coast backing from arranger Marty ... CD

Music In My Heart
PM/Solid (Japan), 1978/1979. Used
CD...$9.99 11.99
The second album from Kathryn Moses – a sweet mix of warm vocals, funky flute, and even a bit of sax! Kathyrn's as great a singer as she is an instrumentalist – and the album offers equal parts of her talents – stepping out with a style that's often a bit funky at the bottom, ... CD

Living Scat – Neo Standards
Solid (Japan), 1960s/1970s. Used
CD...$5.99
Breezy and easy vocals from Japan – a collection of recordings made by singer Kayo Ishu from the late 60s and 1970s – not really "scat" in a conventional style, but cool wordless vocals with a sweet jazzy feel! The 19 track set brings together tunes from a variety of ... CD

Sarah Vaughan With Clifford Brown (with bonus track)
EmArcy/Polygram, 1954. Used
CD...$4.99 (CD...$2.99)
A jazz vocal masterpiece from Sarah Vaughn – one of her greatest albums ever, and a record that raised the bar for countless vocal sessions in years to come! Sarah's working here in an intimate group arranged by Ernie Wilkins – filled with famous trumpet solo work by Clifford Brown, ... CD

Doozy
Open Art, 2009. Used 2 CDs
CD...$4.99
A wonderful 2CD set from Jackie Ryan – a contemporary California vocalist, but one who sings with a really classic sort of groove! The album reminds us a lot of Bay Area jazz gems from the 70s – warm and soulful, with an easygoing groove that draws heavily from the instrumental work of ... CD

Portrait Of Sheila
Blue Note, 1962. Used
CD...$6.99
One of the only two vocal jazz albums that the Blue Note label recorded back in the day – and a haunting batch of tracks from a young Sheila Jordan! The style here is quite different than that of Jordan's later, more experimental records – and this early session shows her as an ... CD

Dreamtales
Adventure Music, 2004. Used
CD...$2.99
Very spare vocal work from Claudia Villela – recorded with only piano backing by Kenny Werner, in a mode that hearkens back to some of the experimental European vocal sessions of the 70s, or similar work on ECM. The production's got a very spacious feel – a sense of looming urgency ... CD