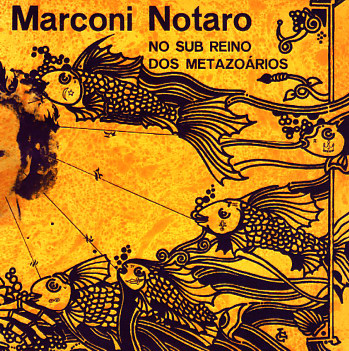 Folksy psychedelia from early 70s Brazil – a wonderful little album by poet/singer Marconi Notaro, done in collaboration with the team of Lula Cortes and Ze Ramalho, with a feel that's similar to their own classic Paebiru! The feel here is quite loose at times – almost improvised percussion and guitar bits jangling together – but a few other numbers get more rock-based and electric, making for weird shifts in mood that continue to keep the record on edge. Everything's quite trippy overall, and made even more so by the production techniques – which are simple, but really effectively used to abstract out some of the best elements. Titles include "Anthropologic", "Ode To Satwa", "Symphony In RE", "I Have No Imagination To Trade Wives", "Oh Greedy Life", and "Desmantelado".  © 1996-2022, Dusty Groove, Inc.