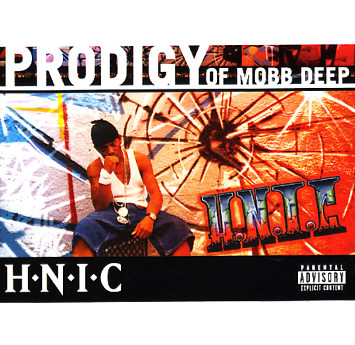 Prodigy (of Mobb Deep)
Loud
Loud (label)
Get On Down
Get On Down (label)
Hip Hop (CD, LP)

Prodigy's solo debut HNIC – gritty and raw from intro to outro, with a methodical flow on par the with the best of his work with Mobb Deep in the best moments – while taking stylistic detours! Naturally, there's a personal vibe to the peak tracks here that he couldn't explore so singularly on rhymes in the Mobb Deep canon, but there's some less personal, more boisterous bangers here too. Stands the test of time pretty strongly production wise, too. Includes the classic "Keep It Thoro", "Wanna Be Thugs", "Infamous Minded", "Trials Of Love", "What U Rep", "YBE", "Three", "Can't Complain" and more, plus guest appearances by Havoc, Big Noyd, Cormega and production on a few tracks by Alchemist.  © 1996-2022, Dusty Groove, Inc.